In northern America (the USA and Canada) the billhook is relatively uncommon. Despite being a tool included in the early settlers' tool lists, and a tool well known and common place in most of Europe, where the vast majority if immigrants came from, it appears to have almost disappeared fron the american psyche.

It was also known as a fascine knife (for making military fortifications) in pre-Revolutionary and pre-Civil War America, and was listed in some 19th century axe & edge tool makers' catalogues, and one Italian maker even set up shop in California in the early 20th century, but by and large it is not a commonplace tool...

However its big brother, known in the UK as a slasher, has survived as the long handled Bush Hook or Brush Axe (the two names seem interchangable) and its lighter cousin the Bank Blade or Ditch Knife..

Most of the billhooks that I have seen advertised either on eBay.com (USA) or specialist edge tool or weapon sellers' websites for the past 10 years or more are European in origin. Curiously, one of the well known US makers, Collins, did show a billhook in their 20th century catalogues, but the blades were stamped 'Made in Germany' (see below).

One tool of the billhook type is the Woodsman's Pal. Invented by a Swiss emigré, Frederick Ersham, architect and engineer, in the 1930s, it was put into production by Ersham at Victor Tool Co., 1230 Spruce St., Reading (PA) in 1941. Designated the  LC-14-B, it became the Marines' Survival tool, and is still in production today (see below). 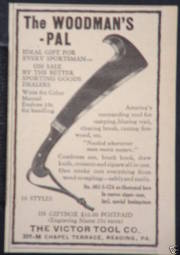 A 1945 advert for the Woodsman's Pal. The version shown has a wooden handle, the LC-14-B military model has a leather grip and a knuckle guard,

The Bank Blade has a thin flexible blade, like that of a hand saw, whereas the Bush Hook has a thick forged blade. 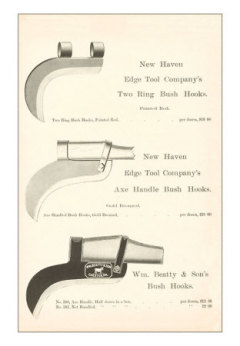 Different patterns of Bush Hooks by the New Haven Edge Tool Company. They were often supplied unhandled, the user fitting his own. This allowed them to be packed closer for transport and delivery. 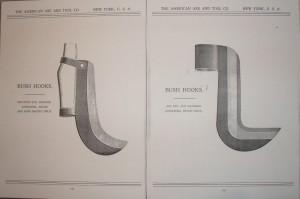 Bush Hooks by the American Axe Company, one of the few edge tool makers who also listed a billhook in their catalogue. 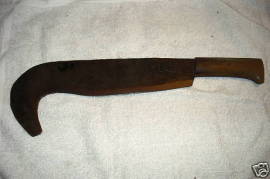 A 'Legitimus' billhook by Collins & Co: established in 1826 in Hartford (Conneticut), they became one of the USA's biggest producers of edge tools. The stamp is also worded in Spanish, indicating it was probably made for export to Mexico or South America. 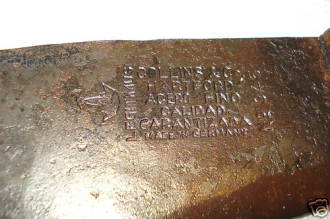 The stamp from the Collins' billhook (above). Note:  The steel and guarantee are in Spanish, and the tool is also stamped 'Made in Germany'..