The billhooks or Germany are as varied in shape as those from the UK, France or Italy. Each region has its own style, and often its own name: häpe in the north east, knipp in the south west, säsle in the centre or gertel in the south. The most generally used terms are hippe (plural hippen) and haumesser, although the latter may also refer to a meat cleaver... Again one of the problems in identifying a tool, it may not be confined to a single use, but may have many, and tools do not follow national boundaries, so French, Belgian, Dutch, Danish, Russian, Polish, Czech and Austrian tools can also be found. A single tool from an area is not enough to identify its origin, but a series of similar tools from various sources within a region can be indicative of a regional style.

An unusual shape from Vörstetten in the south west corner, near the border with Alsace and Switzerland. 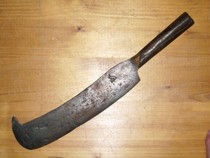 A schwäbian schnaier, from south west Germany, with a convex cutting edge and a hook on the back, this has similarities with the English block bill, and the Austrian praxe. The tubular steel handle is more often seen on tools from the Alpine countries. 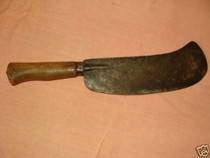 This one is from Deggendorf in the south east, near the Czech and Austrian borders. The handle looks to be very similar to those found on Dutch tools.

This hackebeil from Nürnberg in south east Germany is a typical example of a modern tool that is also found in Austria (known as a praxe or braxe). Its convex cutting edge and the hook on the back are variations of the two previous examples.

The hippen from the Bayern region (Bavaria) in the south east are often decorated; have a single bevel and a pronounced lozenge where the tang meets the blade. The following images show a selection of this type. They all come from a north-south corridor which stretches from Coburg in the north, through Nuremberg to Munich in the south. The most common decoration is a 'Tree of Life', which is also often found on Austrian and Hungarian tools