A Load of Old Billhooks 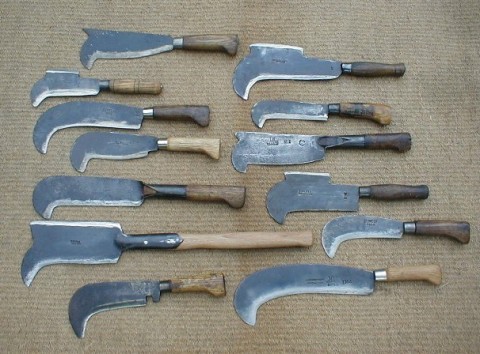 The above bilhooks are not mine, the image is from the web - however, I could duplicate it many times over...

As you have reached this page I guess you are also interested in, or have a query regarding, billhooks (also known in England as hand-bills, bills or hackers) or similar edge tools. This site is being regularly updated, and new information added. You may be able to find pages from the previous versions of the site or the original site hosted on Freeserve by using Wayback Internet Archive.

If you are visiting from outside the UK, or a non English speaking country, please send me information on the billhooks from your country (images, names, history, catalogue pages, museum links etc) using my contact page. This will allow me to extend the site and include more information.

The site is collated by Bob Burgess, who lives with his wife, Lyn, (who also collects kitchenalia and 'cream and green' enamel ware) in the picturesque Wylye Valley near his hometown of Warminster in Wiltshire (UK), and who is the owner of a private collection of over 6000 billhooks and numerous other edge tools. Of the billhooks, approximately 60% are from the UK and the other 40% from Western European countries, but there are some are from other continents. Some parts of the site may be biased towards French tools, but this is only because of a limited grasp of the language, and thus his ability to research French websites.

The aim of the site is to inform, educate and share - as well as the collection of tools there exists a large (and equally uncatalogued) archive of images as well as source material such as copies of manufacturers' catalogues. As mentioned above, I am always looking to extend this archive and if you have any old photographs, papers, catalogues relating to edge tools in general, or billhooks in particular, I would be pleased to receive copies. I am particularly looking for information on the smaller regional or village makers of the UK.

As this site develops I hope to be able to show examples of tools made by some of the smaller makers and create a list of makers. I have done this for France, using some French annuaires and almanachs from 1830 to 1937 and discovered over 4800 makers of edge tools - and each year still find tools from makers that are not yet on the list.. I suspect that the situation was similar in the UK until the beginning of the 20th century...

If you have any questions please feel free to contact me by e-mail and if you have a specific query please attach an image (if you have one). If you just want to comment on the site please use the guestbook. Again, can I please ask that if using this site from outside the UK,  send me images of your local billhooks (or equivalent) and also the local names used (including dialect variations if you know them).

Please use the Google Translate button at the top of the page to translate this home page to the language of your choice. For all other pages you will have to use Google Translate on your toolbar, or if you have not added this, open this page using Google. Unfortunately Google often mis-translates, but you may be able to get the general meaning.

From 06 December 2012 any changes or new sections will have the word (NEW) added to the heading title, or sub-title on the left. As sub-titles will not be immediately visible, to find any updates I have suggested that you enter the word 'new' on the Search page, but for some reason this does not always work. After approx 1 month, or when new changes are made, it will be removed from the heading title.

You are Visitor Number since 01 January 2012

You are Visitor Number since 04 January 2013 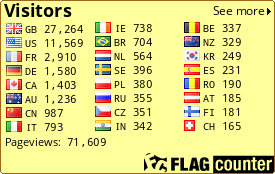