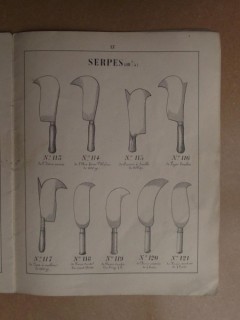 One of the most useful sources for identifying old tools are manufacturers' catalogues. These were produced from the early 19th century until the present day, but those from the mid to late 19th century up to WW2 are often the most useful. They are usually well illustrated, and in some case show over 200 regional styles of blade shape. Post 1960 amalgamations, closures and declining sales reduced the range of a tool that was less and less used. Consquently more recent catalogues offer very little choice (unless you happen to live in Italy, where a wide range of regional patterns are still being made).

The Talabot (Saut du Tarn, France) catalogue of 1935 shows over 200 regional patterns, and in the preword to the section on billhooks (serpes et serpettes) they state that they have the templates for over 3000 patterns*, and would make any other upon receipt of a paper pattern or a cardboard template. Their works at St Juery has since closed and is now an edge tool museum, and I have not been able to trace the patterns. However there is a video of the Bret works at Charavines taken just before it closed - sadly no sign of their billhooks, but a wonderful tour through their pattern stock of hoes - shelf after shelf, rack after rack, filling a small room - all numbered and labelled - so one can get an idea of what larger industrial makers could, and did, make..... Unfortunately they are all now long gone (unless Revex, formerly Experton Revollier, who took over the Bret business have them in store somewhere....).