Often headline news these days, as church roofs and war memorials are being stolen every day for their scrap value, metal theft can also affects us more directly. Three years ago I lost a dozen old French billhooks - they had been overcleaned by a previous owner, and were in a pile outside my shed weathering, and acquiring  a new layer of rust. The thieves also stole some antique cast iron weights, and sundry other metal items. In the process they smashed an old oak rail and post gate to get their vehicle in.

The dozen billhooks stolen had cost me over £70, cleaned and restored they would have been worth at least twice that. Scrap weight, under 10 kg - scrap value at say £200/tonne about £2...

They, or other gangs, have been back at least three other times, once on consecutive nights - this week (15 February 2012) they tried again to gain access to my workshop, where the bulk of my old billhooks are kept. They jemmied opened one door but could not get inside because of a pile of (other) junk just inside. They also shredded one of the double doors to try and get past the high security hasp, staple and lock that they could not get off with their bolt cutters. I spent all of yesterday improving the security, but still have to rebuild one side of the damaged door - and I suppose I will need to buy and add some form of alarm or camera system. 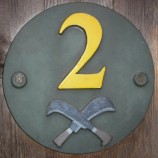 This home-made cast aluminium house sign was on my garage, until last year when they decided to jemmy it off for scrap. Many years previously, it had taken me a day to make the wooden pattern, and another day to cast and fettle the casting, and then paint it and fit it - now it's gone for a couple of quid in scrap...

A cashless scrap system is one proposal - sellers would have to have a bank account, and payment would only be by bank GIRO transfer. To support this system, please sign the e-petition HERE.

Personally I think this is not enough - any bulk movement of scrap metal, especially on a small open bed truck such as Ford Transit, should be regarded as suspect. The police should have powers to stop and search any vehicle carrying scrap, and impound any that does not have a Waste Carriers Licence. A private individual with a local address and a bonafide reason for carrying any metal should have no reason to worry about such actions.

Scrap yards need to be policed much more rigourously, and any that fall foul of the laws should be closed by the Local Authority. All 'backyard' scrap dealing, metal recycling activities (e.g. burning off insulation from copper wire) should be made illegal, thus closing many thousands of unlicensed sites.

Anyone who lets an unlicenced waste carrier take any of their scrap away, or sells it to an unlicensed dealer, is possibly aiding and abetting a criminal activity.

Theft of items such as drain and road gully covers has caused serious accidents. Theft of copper wire has shut down railway services. It is costing us all money, either directly or in our insurance premiums, or local community charges. Failure to act will see our heritage further vandalised and the environment trashed by a few who consider themselves outside the law - 18th century milestones, Victorian road signs, 20th century war memorials, public works of art - most are irreplaceable - what sort of land they will leave for our children and grandchildren... 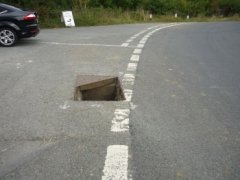 A section of manhole cover stolen at a road junction - imagine hitting this at 30mph, and the damage it would do to your car's suspension... or worse still if on a bike or motorcycle.. 500 stolen from Worcestershire in 2011 - an estimated £89,000 to replace them all...