The podone (singular podón) of Spain, also known as podadora, are as varied in shape as those of Italy. They fall into two main types, those that would not appear unfamiliar to English eyes,with a single or double blade in line with the axis, and those that follow the 'Mediterranean' pattern, with a cutting edge at right angles to the axis, and a long and narrow back blade. These latter were used for vine pruning, and the shape was common in Southern France, Italy, Sicily and Greece (where the author believes the shape originated).

Although the word podadora (also spelled podadera or podadeira) is given as the dictionary equivalent of billhook, the word has acquired a more general usage in Spanish, is now used for all types of pruning tool from secateurs to motorised strimmers, brush cutters hedge cutters and even chainsaws. The word podón is more commonly used for a billhook, with several other dialect words such as podão, podoa and podal being used in the regions near Portugal. Other terms are also used, such as hacha de podar (pruning axe) - or hocino (small sickle) or corquete for the small hooks used in vineyards to harvest the grapes.

A double bladed version, not unlike those found in England 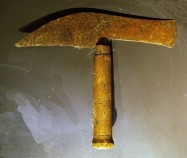 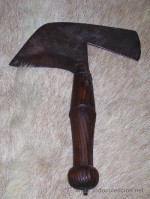 This vine pruning hook is from Huesca, in the Aragon region of north-east Spain. 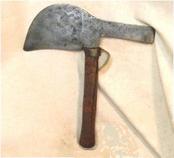 Although very similar in shape to the above, this model is far heavier - it's much too heavy for vineyard use. The ribbed handle, found on other tools used in butchers's shops, suggest it may in fact be a sort of butcher's cleaver.

This hoz is from the region around Madrid - the word hoz (plural hoces) more usually refers to a grass or reap hook. The thin back blade suggest this is also used for vine pruning. 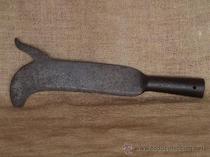 Often known as a foceta or a roçamadora, this type of billhook with a socket for a long handle, and a hook on the back of the  blade is found in many European countries, including Wales

This model combines elements of several types - and may possibly be regarded as a transitional shape. The back has broken in use, and been repaired by a reinforcing strip of steel held in place by rivets.

This podón is similar to some found in central Italy - its origin is uncertain, but it's probably from the same region as one in the preceding image... 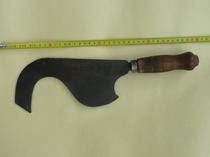 This one is from Galicia in north west Spain. The style is found in many western regions, as well as in Portugal. It combines the hook and axe in one blade, but is probably more used fo general trimiing than vine pruning. The position of the hook, within the width of the blade, also means it could be used for splitting kindling wood on a block, without the beak digging in. 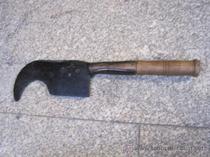 The above type is more commonly found with a socketed handle - this one is from Pontevedra.