The billhook is common in most Scandinavian countries. I have examples from Sweden and Finland, but not yet from Norway or Denmark. It is also known in the Baltic States (Estonia, Latvia and Lithunaia) also in Russia and the Ukraine. The Russian/Finland border state of Karelia (renowned for its wooden buildings) had a bear holding a billhook on its national flag. 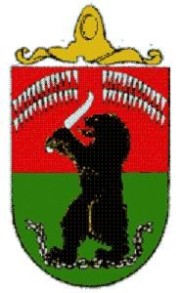 The old (mid 20th century) flag of Karelia. The bear is holding a tyical Finnish 'vesuri' or billhook, having cut its chains of bondage to Russia. (the current flag of Russian Karelia just shows the bear, without his billhook). The images above the bear represent the northern lights (Aurora Borealis) but to me look like rows of billhooks.......

In Finland there are three patterns of billhook, and regional variations in shape of these. The most common is the open socketted 'vesuri', which although having a longer blade, is typical of a type found throughout much of Europe, and is similar to those from the Iron Age in Britain, and currently still found in Spain, Morocco and Turkey.

An old unnamed (village blacksmith made ??) model, with the socket forged at the end of the blade. Probably early 20th century. 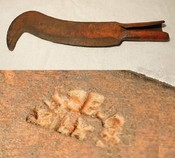 A factory made 'vesuri' with the stamp of the Fiskar company. Like the model above, it has an open socket. 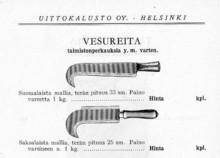 In the 1938 catalogue of Uittokalusto Oy (Helsinki) 'vesureita' were offered as socket or tanged handles (and also as a double edged version, also known as a 'vesoin' or 'kassara').

A modern Finnish 'vesuri', the blade is made of stamped steel with a closed socket welded to it. This pattern is common today, and is still made by several manufacturers. This one is probably a Marttiini, although they have now stopped making them, and concentrate on making Suomi Finnish knives. The yellow object is a plastic blade guard.

The above range of 'vesureita' is from a small family firm, Härmän Täonta Oy - this model is currently being imported into the USA by Kellam Knives. Until recently they make a wider range of other tools, including 'kassara' and 'havurauta'.

Another 'vesuri' with a curved blade. 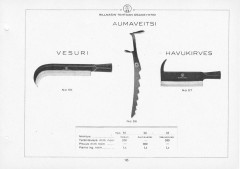 A page from the 1928  Billnäs'in Takeista catalogue showing two types of billhook, the one on the right is similar to the English block hook.

A 'hakokirves', also called a 'havukirves' (softwood axe) or 'havurauta' (softwood iron) probably used on a block for chopping firewood, the hook on the back allows the user to pull the next piece forward for chopping without having to bend over and pick it up. 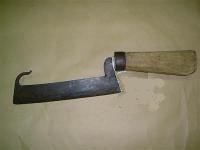 Another style of  'hakokirves' (possibly also 'hakukirves'  which literally translated to retreiving axe). This shape of blade is also found in Germany and Austria... This one has a cranked, tanged handle, not the more common socket fitting. The smaller models were used for cutting bedding, e.g. pine branches, or fodder for cattle

Below some more images of hakokirves, mainly from collections in Finnish mueums - both with and without hooks, the method of manufacture varies considerably. 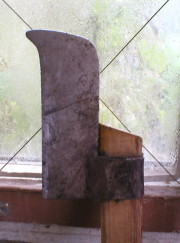 A Russian Сучкоруб - an axe handled type of billhook. 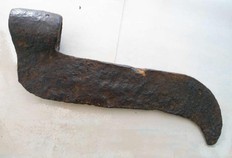 Another Сучкоруб with a round eye. This type are also found in Turkey, so it is likely they can be found throughout the Caucasus region. 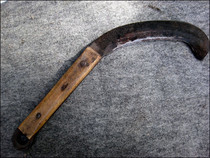 Technically not a billhook, but a sickle ('sirppi') this version has a thick heavy blade for cutting brushwood, not the more common thin blade used for grass and cereal crops. 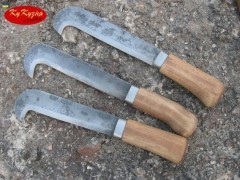 Modern Ukranian billhooks by blacksmith, Volodymyr (Vladimir) Kukuznia made for re-enactment, but to a local pattern.