The dictionary definition of a billhook.....

(The above definitions are  taken from the Shorter Oxford English Dictionary)
﻿

A billhook is a generally seen as a short cutting tool (bill) with a curved nose (hook), and the majority of  billhooks, english or foreign, are easily recognisable as being of this  shape, but in fact this definition is not correct as billhook comes from 'hackbeil' a German word for a chopping tool (see hookbill, below, and Etymology)

The billhook ( or bill-hook) is also known as a  hand-bill in some english counties and hedging-bill in others.   The OED also gives hook-bill, and hack, and in parts of Dorset and  Devon they are still known a hackers. Double edged bills, i.e. those with  a second blade at the back, are referred to as broom-hooks by some  makers. The straight edge of the back blade allows cutting against a block or log, whereas the nose of a curved blade would dig in and prevent contact between  the straight part of the blade and the chopping surface. A broom hook would be of great use to a broom squire, the name for those who made besom brooms, for trimming the head of the broom against a block. Some special bills are made  without the hook, i.e. a single straight blade, similar in shape to meat  cleavers used by butchers, others have an additional hook on the end or the rear  of the blade which is useful for pushing branches into place when hedge-laying.

A small billhook, typically used by thatchers or coppice workers  for splitting  hazel gads and pointing the smaller piece of wood is known as  spar hook. Spars or broches are used by thatchers to fasten the thatch to the roof, and before use they are bent into a staple with an ingenious double  twist which separates the fibres without damaging them.

Billhooks are  also known as pruning hooks, although these are generally smaller than  the average sized bills. Some makers also offered gentleman's and lady's
billhooks, which were usually highly polished and fitted with more ornately turned handles, often made of imported hardwood, antler or horn. One such is the Milton   hatchet, which is double edged and unusual in having a single bevel on  the back blade, similar to that found on a chisel.

Some billhooks have a single bevel on the cutting blade, e.g Kent or Suffolk patterns, but most are sharpened with a double bevel. Occasionally the blade may be cranked or offset: this, or the way the single bevel is ground, mean that some types of hook were obtainable in left or right handed versions. 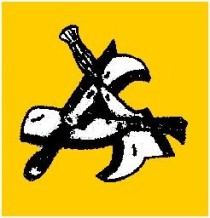 The website for collectors of edge tools, A Load of Old Billhooks is the website of Bob Burgess of Heytesbury Wilts (UK)