The recent edition of Countryfile on BBC1 televison in the UK (shown Sunday 10th March 2013) featuring the Highgrove Estate of HRH Prince Charles (Prince of Wales and heir to the throne of the UK) may have raised interest in both the use of the billhook for hedge-laying, and the billhook itself. Thus this short section on 'Royal' Billhooks has been added. 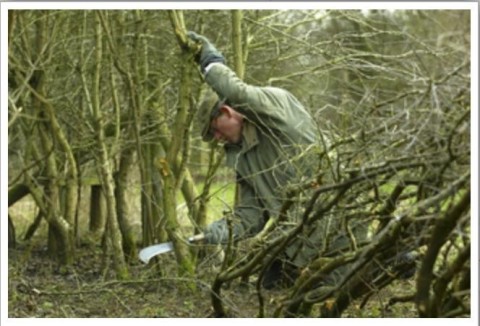 HRH The Price of Wales in full swing with what looks like a Newtown pattern, laying a hedge at his Highgrove Estate

HRH with Clive Gunning of 'Handles of Old Woking' - Clive no doubt hoping to gain the coveted 'Royal Warrant of Appointment' for supplying second hand billhooks. At least HRH knows better than to buy a modern rubbish one....

The passion for working with his hands is not limited to HRH The Prince of Wales - European aristocracy have had amateur workshops installed in royal palaces since the Middle Ages (see the 16th century wire drawing bench of Auguste the Elector of Saxony). In the UK Sir Winston Churchill enjoyed brick-laying as a way of relaxing from the pressures of State, building many walls on his Chartwell Estate in Kent (even having a special compartment for his tools built into his personalised Landrover, and becoming a member of the Guild of Bricklayers).

HRH Prince Charles has a passion for the countryside, and has had many new hedges planted on the Duchy of Cornwall estates. He frequently hosts, and take part in hedge-laying competitions. 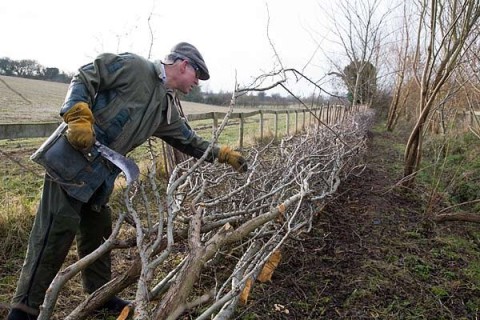 What is less well known is that the Royal Household could have had the largest collection of medieval billhooks..... (maybe they still do in some forgotten cellar).

In the 16th century the City of London rented some Crown land (known as the Moors and situated south of Bridgnorth in Shropshire) from the King, Henry Vlll. Payment was in the form of a 'quit rent' (a nominal rent paid in lieu of other obligations) and is a (blunt) billhook and a (sharp) axe. At Michaelemas (October) the Solicitor to the City of London presents the annual tithe to the Queen's (or King's) Remembrancer who presides over the Court of Exchequer.

Part of the ceremony involves the Solicitor demonstrating the efficiency of the tools by cutting a hazel rod on a wooden chopping block. The 1950's film of this event show hin attempting to cut a whole faggot of brushwood with a curved billhook, the nose digging into the chopping block, and his attempt unsuccessful.

In the 1980's they bought their tools from Tyzack of Old Street in London, who had a batch of Sheffield or Cannock double edged billhooks chrome plated for the occasion. My old friend and fellow billhook enthusiast, the late Peter Hooper from Chelmsford in Essex, bought the last two they had in stock - the chrome plating being substandard and deemed unsuitable for the ceremony - one of which I now own. Interestingly they were sold without the handle fitted, as it had been removed for the ferrule to be chrome plated as well. 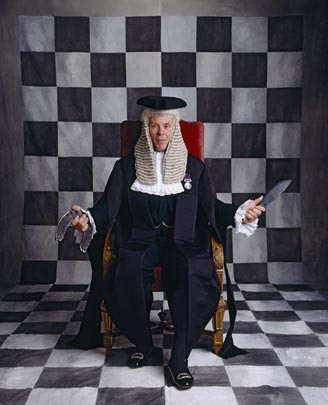 The Queen's Remembrancer with a knife (not a billhook) in his left hand. (c) Mark Cator from Keepers of the Kingdom: The Ancient Offices of Britain

Had the Crown retained the tools, they would have the  most complete collection of medieval tools, however, I suspect in the eary days they were used by the Royal Household - latterly they have been given away to anyone in need of such tools. It is worth noting that although the ceremony continues, the original site of the land is unknown - the original quit rent document must have been 'in perpetuity'. Long may the tradition continue...