One of the most irritating aspects of using a billhook is losing it, or mislaying it. For this reason in the UK conservation volunteers often paint the blades a bright colour so that it can be easily seen when lying on the ground. In Devon and Dorset a leather strap was often attached to the blade to allow the tool to hang from the user's wrist when he wanted to use both hands.

A billhook carrier is not commonly used in the UK, although recently a number of home-made leather sheaths have been seen on various forums. The sheath was a method of carrying military billhooks. but seems to have disappeared from usage in the period following WW1.

In other countries the situation is often different, and either a carrying hook is incorporated into the blade (e.g. in France and Italy), a hook added to the ferrule (I have one example from Italy) or a wooden carrier is used (e.g. France and Nepal). A metal hook that fits onto the user's belt is common in southern Europe.

Medieval images often show the billhook tucked into the belt of the user, a somewhat precarious situation as the edge of the billhook could easily cut through the belt (military sheaths often have a brass lining to prevent the edge cutting through the stitching). 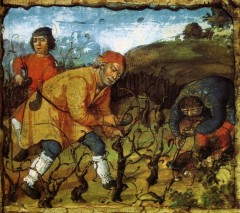 French c 1490. This vineyard worker has a small vine pruning hook in his hand, and a larger one tucked into his belt. 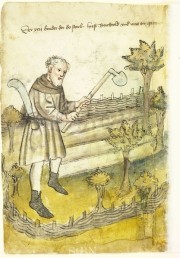 This German worker from the 15th century has his billhook tucked in handle first, with the blade uppermost. Not very stable, and likely to slip out... if he doesn't cut his hand on the balde first.... 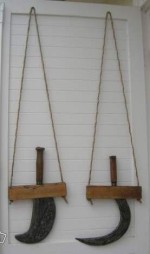 From Châlons en Champagne in France, a simple wooden frame on a string allows the billhook to be hung at the user's waist. Hanging on the back of a door they are available for immediate use as the worker exits the building. 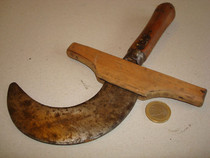 This version from Franche Comte is a little more elaborate, not just two pieces of wood nailed together.

France has a long tradition of Art Populaire, and everyday objects, especially those of wood, can often be aesthetically pleasing as well as functional. This 'porte serpe' in the form of a 'sabot' or clog also bears the owner's initials in copper nails. 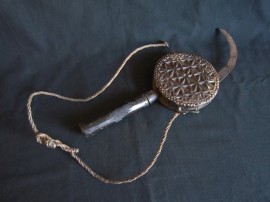 In Nepal and Tibet billhooks and sickles are often carried in a carved wooden holder. The shape and decorations of these varies from region to region, but mainly they are made from from hardwood with a 'chip' carved surface decoration. 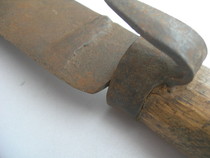 This 'roncola' from Villafranca Padovana in Padua (Italy) has a clip forged into the ferrule to allow it to hang from the user's belt.

More common is a 'porta roncola' a metal clip which fits over the wearer's belt with a hook to allows the blade to be hung handle upwards.

This model from Macerta in the Marche region (Italy) is crudely forged, but functional: the tapered slot will grip the edge of the blade without allowing the cutting edge to touch the bottom. 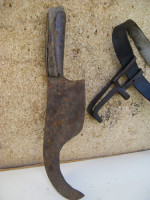 This metal hook from Santiago de Compostela in north west Spain has a holder that extends down the back of the blade. 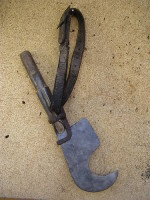 Another set from the Santiago de Compostela region, showing how the blade fits into the holder. The small size of the belt indicates it may not only be held at waist level... 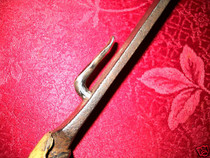 Less common is a hook forged into, welded to or (as in this case) rivetted to the blade which allows the tool to hang blade down from the user's belt. This one is from the Piemonte region of northern Italy.

This small pruning billhook also from Piemeonte (in the author's collection) has the hook forged into the blade. 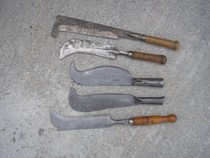 The three long 'serpes' from the Rhône-Alpes region of France have forged belt hooks. The region is just over the mountains from the Piemonte region of Italy: both were parts of the old kingdom of Savoy. The two with metal handles (the socket is not intended to take a wooden handle) are typical of those further north in the Haute Savoie region of France. 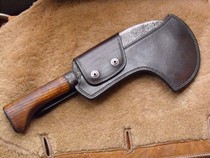 Many examples of leather sheaths can now be seen in the UK. They were used in the 19th century for military billhooks,  but were not common in the 20th century. With the revival of craft skills and conservation work the 21st century has seen many users carrying their billhook in a custom made leather case. 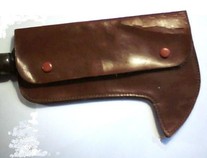 This moderen  French 'etui' or sheath is based on those used by the French army during WW1. From WW2 onwards the leather sheath was replaced by one made of canvas.