What is a billhook? 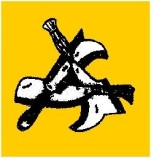 The origins of the word for billhook, and those for other edge tools, allow us to trace their lineage, or the ancestry of the peoples that inhabited the countries where they are to be found. The word billhook, and the subject of this website, sometimes and erroneously written as two words, bill hook, or joined with a hyphen as bill-hook, has a  common definition as a hand-held tool, often with a curved blade (sometimes with a second axe like blade at the back) that usually lies in the same plane as the handle that is primarily used for cutting green wood.

There are other definitions as well. From Victorian times it became common for shopkeepers and householders to save old bills, invoices and receipts on a wire hook, known as a bill hook. These could stand on a shelf of table top, or be wall mounted, and have survived well into the 20th century:

Another definition describes the hooked bar that forms part of the knot tying mechanism in a reaper/binder or baler. Possibly originating as a bale hook (c.f. a bale arm found on a fishing reel), they are now shown in the manufacturers’ catalogues and workshop manuals as bill-hooks: 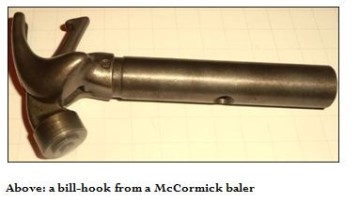