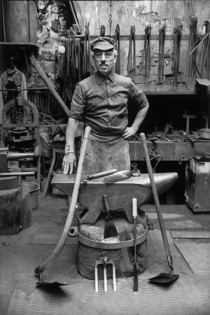 The purpose of this list is to aid in the identification of tools, in particular edge tools, and lists those edge tool works (taillanderies) in France that have so far been discovered. The main source has been the annuaires (yearbooks), often published centrally for the whole country (usually in Paris), and also the smaller regional directories. In addition material has been taken directly from tools, and from other documentary evidence. The great value of the yearbooks is that they often allow one to date a tool, to within about 20 years of when it was made, and in some cases it allows us to trace the family tree of a maker. However, even this is not always as straight forward as it seems. M. Bernard Solon, one of the last traditional edge tool makers in France, and who is now in semi retirement, is at the beginning of the 21st century still making tools marked in exactly the same way as those made by his great-grand father at the end of the 19th century – Alexis à Orléans.

The analogy of this list with that of a family tree is apt, for like a tree it grows as more information is added. If you can help, with information from other year books, or any other source please let the author know. The information contained within these pages is the result of many years of research, associated with the passion of collecting – in this case of billhooks. Grateful thanks are due to M. Gérard Nivet, himself a collector (of oilcans), who has sent me photocopies of much of the original source material.

At this time this list only shows edge tool makers. It does not include those other craftsmen to be found in the French yearbooks, such as blacksmiths, farriers, knife makers etc who also may have made edge tools, especially when business was slow in the main trade. In the small rural communities of France, as in England, the local blacksmith made or mended nearly all articles made of iron or steel. The forgeron (blacksmith) often doubled as the marechal ferrant (farrier) or the taillandier (edge-tool maker), and the trades were not distinctly separated. In the mountainous regions many who were fermiers (farmers) in the summer became ouvriers (craftsmen) in the winter when the snow lay thick on the ground. The Philibert brothers of Nans sous Saint Anne (Jura) continued farming in the summer months and making edge tools during the winters up to the 1960’s

Please feel free to use this list, or copy it for friends to use – its purpose is to help fellow collectors to identify their tools, and hopefully it will also be a useful resource for museums and local historians. Hopefully it will make it easier to know where and when, or by whom, a tool was made.