The serpo-secateur is a hybrid tool, combining the cutting action of a billhook with a pair of secateurs. Prior to the beginning of the 19th century all garden and vineyard pruning was carried out using a pruning hook, a small billhook or 'serpette' in French. Sheap shears had been used since Roman times, and probably adopted by gardeners for trimming flowers, but grass was still being cut with a sickle or a scythe.

Around 1815, a French count, the Marquis Bertrand de Moleville, in exile in England from the Terror of the French Revolution invented a pruning tool that used a sliding blade, possibly influenced by the guillotine that had been chopping off his countrymen's (and women's) heads. The early types all appear to have two blades, one a thick narrow one with an obtuse edge, and the other a thin, wide cutting blade (the anvil type appeared much later).

John Claudius Loudon (1783 to 1843) mentions the French 'pruning shears' (Fig 124) in his 'Encyclopaedia of Gardening'  (1822) which are similar to secateurs, and states they are 'an expedious instrument for pruning the vine'. In the 1831 edition the sécateur is shown as a distinct tool (Fig 389) of the same genre as pruning shears (Fig 391).

The English gardener, William Robinson (1838 -1938) who visited France in the 1850's and 1860's, widely popularised the tool in England in the late 19th century, and indeed may have also led to its use becoming more widespread in France:

(A good secateur is a useful article: give it a trial. The Garden (an illustrated weekly journal) 1873

...the secateur is a valuable implement..... Parks and Gardens of Paris, William Robinson, 1883)

To try to interest a wider customer base, i.e. those who preferred to use a pruning hook, many makers of secateurs also made a combination serpo-secateur.

The variety of shapes and combinations of blade type is considarable, some being billhooks with a secateur blade, while others have additional pruning hook or even axe type chisel blades attached to more conventional secateurs... 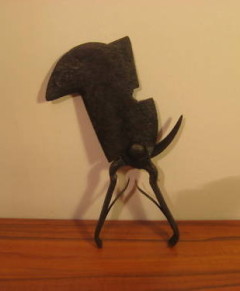 A large billhook bladed tool, with a secondary blade at the back. The lower part of the blade also provides the cutting edge of the secateur. 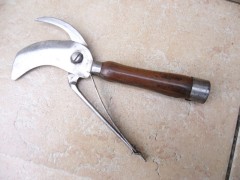 This smaller model has a more conventional appearance with a metal blade secured into the handle by a tang. The steel lever of the secateurs slides flush into the handle when closed, and is secured by a rotating ferrule at the end. 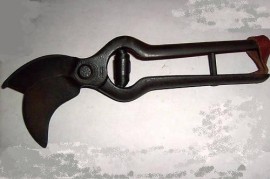 The most common type is of a secondary pruning blade on the side of a conventional 'bypass' type of secateurs. 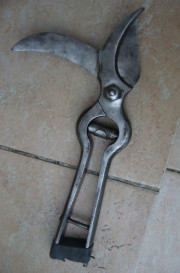 On some the blade is narrower and longer, more like that of a sickle. 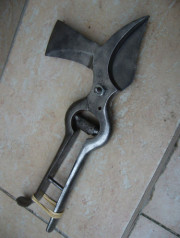 On others it is an axe, or chisel, blade as often seen on the back of vineyard pruning hooks. 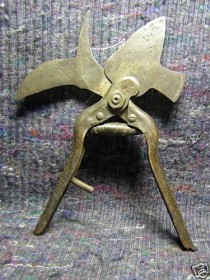 Some have both types of blade. 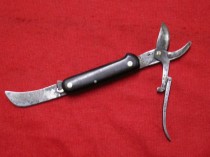 Some even fit within a conventional folding pruning knife - more of a gardener's tool for occasional use than that for daily use in a vineyard.