The billhooks of Greece are as varied as those of other countries, but many show that their origins date from pre-Christian era vine pruning hooks. Modern Greece is a relatively small country, made up from several provinces and hundreds of islands, but the Ancient Greece Empire covered most of the Eastern Mediterranean, including much of modern Turkey, Bulgaria and Balkan countries. 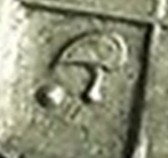 A close-up of a Thracian vine pruning hook, from another coin of the same period. 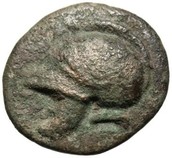 One of the problems of using ancient sources is their reliability. Other Thracian coins have depictions of the helmets worn by their soldiers, which are very similar in profile.. 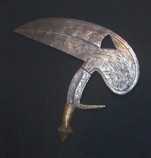 Not Greek, but of a similar profile is this Kota from the Gabon peoples in West Central Africa - probably totally unrelated, but an indication that blades of this profile do exist.

One of the earliest authenticated images comes from a 14th century thesis on agriculture. The blade has a curved pruning hook, and a second axe like chopping blade. 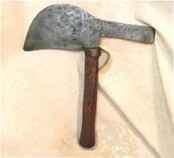 Not Greek, I have added this Spanish 'podadora' for a comparison with the 14th century Greek billhook, shown above. Possible evidence that the influence of Ancient Greece can still be found throughout the Mediterranean. 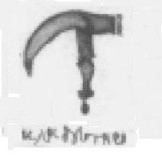 Another image also  comes from another 14th century thesis on agriculture. The drawing is cruder, but depicts a tool with an ornate turned handle.

Another source of images is the religious iconography of the Greek and Eastern Orthodox Churches. St Tryphon (also spelled Triphon; Τρύφων (GR); (Трифон (BG)), born c 225 AD in Phrygia (now part of central Turkey) is the patron saint of wine and winegrowers. He is often depicted with a vine pruning hook in his hand. His Saint's day is generally 1st February: the date vine pruning commences in the warmer climate of the Eastern Mediterranean. His image can be found in churches from Croatia in the north to Greece in the south.

Below some more pruning hooks from other images of St Tryphon.

The shape of the billhook was often copied from one image to another or images may have been repainted, so sometimes the representations may not be accurate, but the variations in blade shape appear to reflect regional differences in form. Similar shapes may also be found in the Balkan countries to the north of Greece, e.g. Romania. 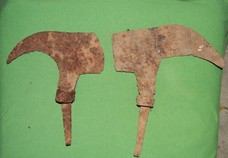 These blades are not Greek, but metal detector finds from Hungary, which shows how similar shaped vine pruning hooks spread throughout the Mediterranean into the Balkans and beyond.