All early edge tool forges were hand powered, and these are still common in Third World countries. Charcoal provided the source of heat and muscle power the energy to drive the bellows and forge the blades. As in the blacksmiths shops the smith often had a striker, i.e. a second person to provide additional hammer power using a sledge hammer. Output was slow, and two men would haves struggled to produce a couple of dozen blades in a day. Even quite large forges remain hand powered into the late 19th century, that of Buckland Netheravon employed about 10 men, but there even though the village is on the River Avon there is no sign of a mill in the village. 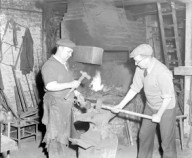 The smith on the left holds the work in his tongs and uses his hammer to indicate where the striker should strike.

Although water mills were known to the Romans, it was not until the 13th century that water power was used to drive corn mills in England. The wheels were soon adapted to drive tilt hammers (also called trip hammers or helve hammers) where the power of the wheel was used to raise a heavy hammer head and gravity to pull it back onto the anvil. Most wheels drove two hammers, a heavy plating hammer, and a lighter forging hammer than ran at a higher speed. The wheel may also have been used to power the bellows and the grindstone. 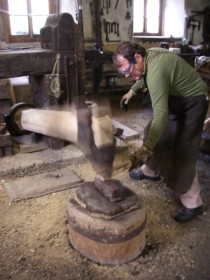 Morris' works at Dunsford, Devon. Richard is demonstrating the use of the trip hammer (his father, Alec, had the wheel and hammer in the old Iron Mills restored to working condition). 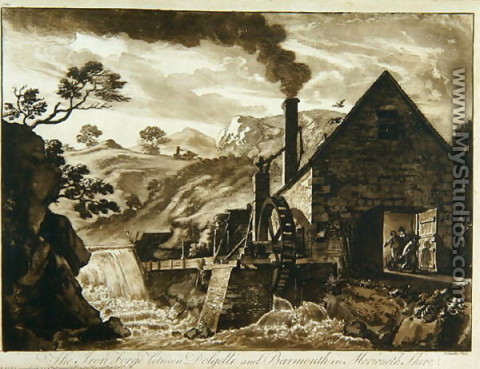 The picturesque rural setting belies the grimy interior of a forge with red hot iron and steel and constant noise. Water power, in this case to a breast-shot wheel, provides the motive power to the hammers. The many small rural mills around Birmingham and Sheffield soon became incorporated into the suburbs of the expanding cities. 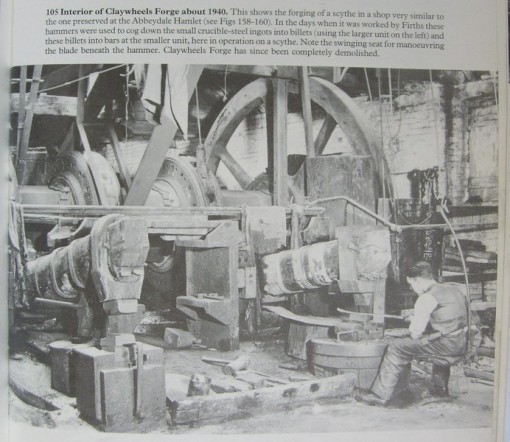 The interior of the scythe shop is typical of a water powered edge tool forge - the heavy plating hammer is on the left, and the lighter (and faster) forging hammer on the right.