The medieval to rennaissance billhook

More is known about Roman era tools, c 100BC to 500AD, than those from later periods. The Dark Ages followed the collapse of the Roman Empire, and it is not until the time of the Anglo Saxons, and later the Normans, that any real evidence can be found. Artefacts such as billhooks are very rare - old iron and steel was a valuable resource, and worn out tools would be recycled into new.

However there is one source that has survived - the illuminated manuscript. From the 10th to the 16th century there are many surviving manuscripts, often Books of Hours, a form of Prayer Book. February and March were the months for vine pruning, and thus illustrations of billhooks being used for this purpose are plentiful. Occasionally ecclesiastical carvings and stained glass windows also provide further evidence.

The heading for this site shows an illustration, from the Breviari d'amor (c 1288) written in Occitan (probably in Béziers, France) by Master Ermengaud (died 1322), of a hooded peasant pruning vines with a large double bladed billhook. The use of the blade in an upwards slicing motion, towards the user, rather than a downward chopping motion, away from the user, is typical of this usage. It is not known who illustrated this copy of the manuscript.

10th century British - British Museum collection. This shape, with an open socket for a wooden handle, was also found in pre-Roman Britain and is still found in the 21st century in Morocco and southern Spain. 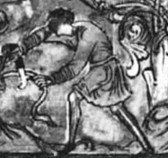 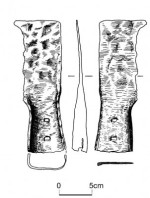 12th century British, from Faccombe Netherton (Hants). Not so different than those from the 10th century, above, or the Roman billhooks used a thousand years earlier. 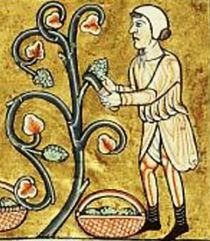 Two vignerons from another manuscript of 1180, from Normany. One pruning with a single edged serpette, the other with a double edged one tucked into his belt. 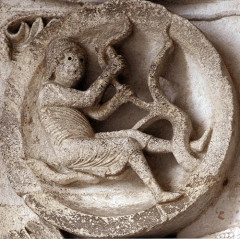 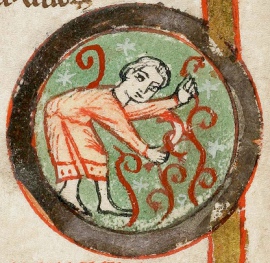 A vignette from a German manuscript c 1200, note the similarities with the French carving, above.. 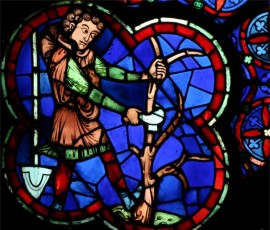 Vine pruning, a detail in stained glass from the Cathedral of Notre Dame, Paris. 13th century. 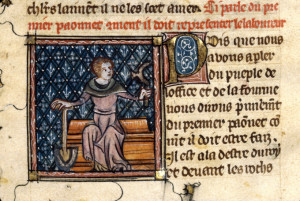 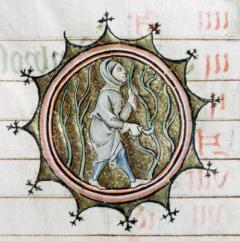 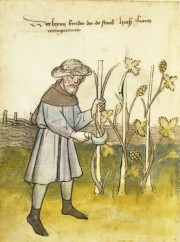 German c 1423. Frantz Weingartman (literally vineyardman) was a resident in the almshouses for retired tradesmen in the Nürnberger region of Bavaria (now modern Germany). All residents had their image recorded in the house book (Die Hausbücher). 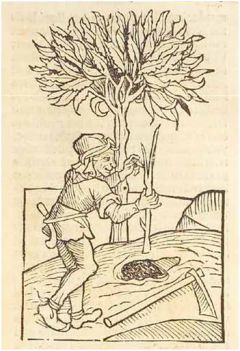 The Liber Ruralium Commodorum by Petrus de Cresentis  shows many images of gardeners with a billhook tucked into their belt. This image is from the 1495 edition. His name and that of the book is spelled in various ways depending upon the language. It is more commonly known as the Opus Ruralium... 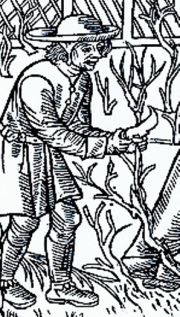 Vine pruning with a double edged billhook, from Le Calendrier des Bergers c 1497. Note the similarity with the German image from 1423, above... 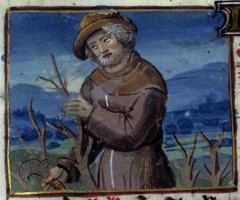 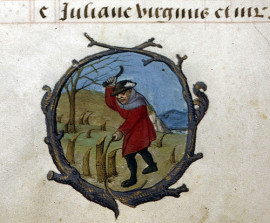 With the introduction of the printing press into England by William Caxton in the middle of the 15th century, book production relied less on the writers and illuminators of manuscripts. The movable metal type invented by Gutenberg, and the use of woodcuts for illustrations meant that books could be produced in quantities hitherto unknown. By the Elizabethan period, i.e. the 2nd half of the 16th century, a period of enlightenment saw the printing of many technical and scientific books, including many treatises on gardening. Various herbals had been published over the previous century, but one of the first books on gardening was Thomas Tusser's One hundred Pointes of Good Husbandrie, which appeared in 1557﻿,

A French nobleman's hunting knife in the shape of a billhook. This decorated billhook is probably late 16th century, and is typical of the tools made for the rich landowners. Its beauty and value must have contributed greatly to its preservation in an almost unused condition. This one from the V&A Museum London. Similar can be seen in the museums of Paris, Rouen and Metz. The ones from Metz are part of a group of tools including a pruning saw and spring loaded pruners, indicating use in a gardening context, rather than hunting. The back blades on the 'serpettes' appear to have a single bevel, like those on the English 'Milton Hatchet'. 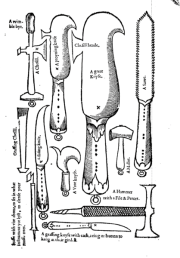 One of the earliest printed illustrations of billhooks can be found in the 1572 book on grafting by Leonard Mascall, A Booke of The Arte and Manner How to Plant and Graffe All Sorts of Trees, in which he shows a Great Knyfe with a Chesill Heade, a Proyning Knife and a Vine Knyfe (plus other assorted tools). Translated from a French manuscript of David Brossar, L’art et Maniere de Semer Pepins et de Faire Pepiniere, it describes how the tools are use in the pruning and grafting of fruit trees etc. 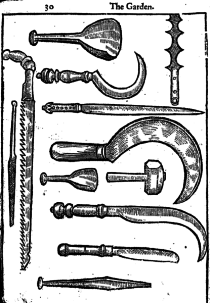 This image shows another range of pruning hooks and billhooks. Originally page 30 in the The Orchard and the Garden (1594), and page 34 in the Expert Gardener (1640) in 1654 they were later included in the Country-mans recreation. The author, William Hunt, took his sources from various French and Dutch publlications. 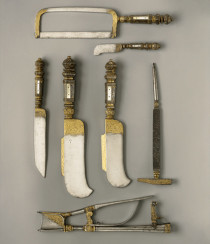 This collection of pruning tools made in Moulins (France) date from the late 16th century. Like the one from the V&A, above, they are highly decorated tools for a gentleman landowner. Note that the curious file-hammer-awl combination shown in Mascall's work, above, actually exists. This collection is now in the Metropolitan Museum of Art in NewYork.