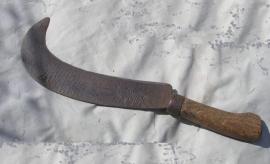 AB - a blacksmith made billhook, made from an old farrier's rasp - the workmanship is superb, and similar to that of A Willis of Bramley in Hants. I guess many blacksmiths made tools when trade was quiet.. 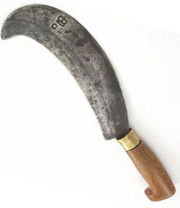 CS and Crown logo - most likely from Sussex, made by a village blacksmith who also made edge tools 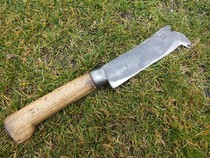 HF  - stamped twice, this billhook found in Hertfordshire appears to be a Kentish or Sussex Weald pattern (and maker), most likely Henry Faulkner of Uckfield,in East Sussex. 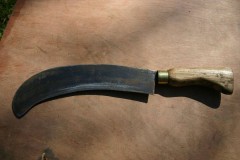 LJE - a south of England, probably Sussex, pattern from the collection of Ralph Griffin from the Isle of Wight. 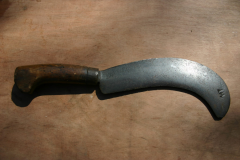 LW - another Sussex pattern from the collection of Ralph Griffin.

This one was missed on eBay in July 2013 - query makers name **OLDICK. Dug up in a garden in Whitchurch, Salop. It may be a local maker,  but the blade shape is very similar to some French patterns BIRKINGHAM - The adze blade on the left is stamped Birkingham, Wolverhampton with the /l\ (military pheon) and 194??. Nothing further is known of this maker. Possibly the firm was bombed out later in WW2... The axe blade on the right is stamped CT Skelton, a well knoen Sgeffiled maker. 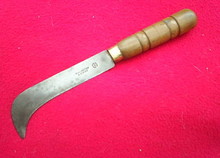 BLACKBURN & HOMER Nothing known of this maker, I suspect a cutler rather than an edge toolmaker. This appears to be a tea pruner, probably for the Indian market. 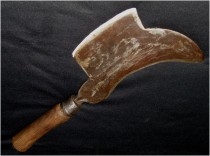 J BRATLEY - this one was found in Easton, Nottinghamshire and is typical of those from the county. The incused name stamp with a zig zag edge is of a type used in the mid 19th century.

BROOKES BROTHERS of Sheffield - no other information - this is an unusually shaped shipwight's masting axe.

BUCKLAND - Netheravon is a small village on the river Avon in the centre of Salisbury Plain in Wiltshire. For a village of its size it had an abundance of blacksmiths and edge tool makers. James Buckland employed several men making edge tools, the Sheppard family were blacksmiths, also employing a number of men. Sheppard sons took over many village smithies elsewhere in Wiltshire. The Buckland family appear to have disappeared from the Census at the end of the 19th century - Sheppard took over the business, and later tools have the Sheppard stamp plus the original Netheravon stamp used by Buckland. I have two Buckland billhooks, and one hoe by Sheppard.

BULLOCK BROS - Edge Tool Makers, based in Walsall. From the company records it appear that were incorporated in 1954 and closed their doors in 2012. The only billhooks I have seen have been have been made to military contracts. This one is stamped 1955.

BURY & CO, Sheffield - as yet no tool by them has been seen..

BUTCHER, Sheffield...  an adze by them - no other details at present..

CALDWELLS - the only billhooks I have seen by this company are nasty modern stamped ones with cross rivetted handles, but the company The Stockton Heath Forge was founded in 1770 in Warrington, and the Caldwell family have been involved since the early 20th century, or even earlier. When I spoke to Mr Caldwell Sr in the 1970's he was fiercely proud of the company's heritage, so I will not insult his memory by putting an image of a modern tool on this site, and wait until I obtain an example of an old one.... Interestingly, the Stockton Heath Forge stamp apppears on the board of stamps I obtained from Morris in Devon in the 1980's, so Morris made some of their tools. 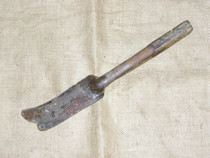 CARTER Charles of Kirkburton - near Huddersfield in Yorkshire, the Carters were edge tool makers in both High Burton and nearby Kirkburton. Established in 1740 by Jeremiah Carter in High Burton: the 1834 Piggots directory list three edge tool makers at Kirk Burton: Henry Carter, John Carter and Robert Carter. This is a well used Yorkshire pattern. 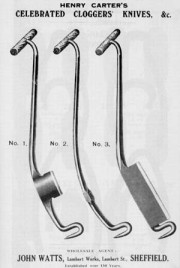 Henry Carter of High Burton (near Huddersfield) is best known for his clogmakers' knives. Like that of other edge tool makers, it would appear that the name was still being used after he had ceased working. A billhook by him was sold on ebay in 2013, it also had the JC stamp. 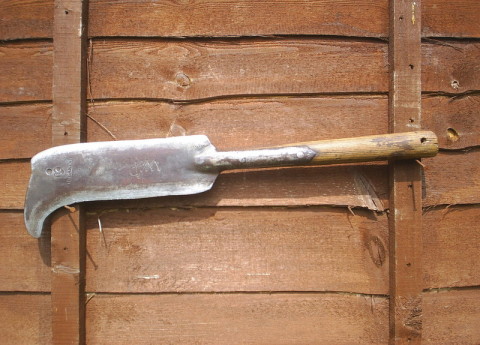 Another Yorkshire pattern, also stamped JAMES CARTER, but this time also with the IC in a heart stamp, thus tying him to the rest of the Carter makers. 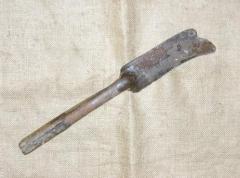 CARTER - Richard Carter Ltd is still making edge tools, including billhooks, in Honley, near Huddersfield.  By 1870 the company was known by its current name. The No 2 Yorkshire billhook shown is stamped RICHARD CARTER, KIRK BURTON and has a stamp with IC in a heart (which is probably the original stamp of John Carter). 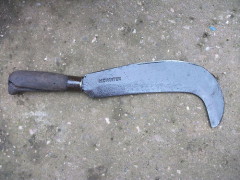 M CHANTER - another unknown maker (or retailer??) - this hook is from Somerset, and is a typical shape from the south or south-west of England.

COCKERILL - John Cockerill was an English entrepreneur that established businesses in Belgium in the early 1800's, notably his works at Seraing near Liege, c 1817. He traded throughout Europe into Russia, and died after a business trip to Warsaw in 1840. Although an established steel maker, he was also a main importer of tool steel from Spear and Jackson in Sheffield. A John Cockerill Shovel in the Stonehill collection is stamped with Aetna Works, Sheffield (which was in Savile Street, and also the home of S&J from 1837). It is probable that Cockerill is a brand name created by S&J in honour of one of their most important customers, possibly to aid their joint sales in Europe. At one time in the 20th century, they produced hand-saws with the John Cockerill brand name on them, below the S&J logo. 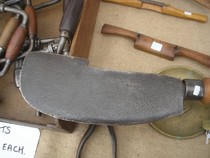 E COLE - this Devon pattern meat cleaver was seen at the Woodfest at Westonbirt in 2011.

COLES another Sussex pattern from the collection of Ralph Griffin

COOPER - with a crown. Nothing else known of this maker of a Hertfordshire pattern billhook from the collection of Ralph Griffin. The crown logo may refer to the quality of the steel used, and was also used by other makers such as William Swift, Cornelius Whitehouse and Brades.

CORNIS (Possibly Cornish??) This West Country/Devon Half turn was posted on Billhooks Junkies on face book in January 2017 by fellow Collector, Rob Beard 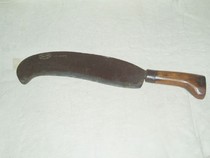 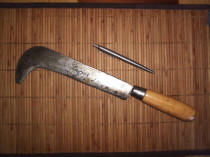 FINCH - the Finch Foundry in Sticklepath operated from to 1814 to1960. After closure it was saved from demolition by the efforts of Bob Barron, who founded the Finch Foundry Trust in 1966. The site is now in the care of theNational Trust. From 1814 the firm operated as William Finch, and from about 1835 as Finch & Sons (at the time of the 1851 Census, William, his five sons, and his grandson all worked there). After William's death in 1862, the firm was known as Isaac & John Finch. When Isaac died in 1873 it became John Finch, and after his death his wife, Emlin, ran the business in her name until 1882. From 1883 to 1885 it was run by their son George, and after his premature death by his widow Rebecca. She died in 1891, and the firm was run jointly by her sons, and became known as Finch Brothers until the last of the brothers, Albany George, died in 1945. It then became Finch Brothers Ltd until closure in 1960. 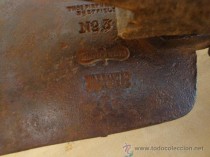 FIRTH Thomas, Sheffield from 1842 - started as scythe makers, so probably also made billhooks. In 1900 the tool division became Firth Brown Tools, with the parent company continuing as steelmakers. This is a blade from an 'azuala' a stirrup adze made for the Spanish market GALLUP of Wadhurst in Kent - this billhook has been fitted with a long handle to turn it into a slasher, hence the rivet through the handle and tang. 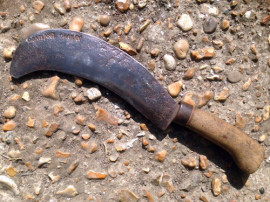 GILBERT this dished socket Kentish pattern is very similar to those made by W Swift, and I suspect it may be a dealer's stamp, rather than a maker. (see SWAFFER below)

GREAVES ISAAC  - were listed in Piggots Directory in 1829. When I visited Sheffield in the 1970's Lambert Forgings still had hundreds of their original tools in their backroom, having just bought up some original stock. They also has tools by William Greaves of Sheaf Works, better known for their Electro Boracic Steel coopers' and carpenters' tools. GREAVES WILLIAM - also stamped Borax Works, Sheffield and Electro Boracic Steel, with a number 8 near the socket. On the reverse of the blade it is stamped SECCO. The blade shape appears to be similar to those found in South America, as is the large diameter round (parallel) socket, and may well be intended for export. Secco may be the model code: manufacturers often used a word code for export tools so that non-English speakers could order the correct tool. GREEN - Alfred Green - no information on this edge tool maker - I do not know if he also made billhooks. This tool is a tanners fleshing knife.