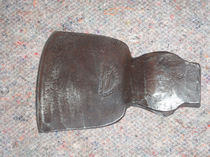 CHARLES TAYLOR,  Sheffield -  a Kent pattern axe head - I have seen a billhooks bearing their stamp.. 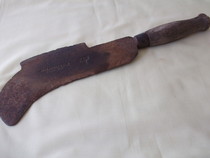 THOMAS Chas & Co Ltd  - nothing is known of this Birmingham maker, his name is found on a double edged billhook. He may be related to Richard Thomas, below. The logo is a large 'T'. 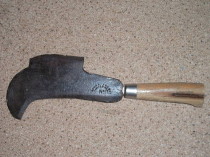 THOMAS Richard , Icknield Works, Icknield Square, Birmingham - they were listed in the 1849 directory 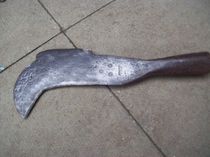 R TIMMINS & SONS were makers of heavy steel 'toys' - toy in this context means any small metal object, including hand tools. The company, founded in 1790 by Richard Timmins, was situated in Hurst St, and later in Pershore Street, Birmingham. In 1889 they were taken over by another Birmingham maker, W & C Wynn of Suffolk Street (also listed as edge tool makers) and who moved to Commercial Street in 1872. For a few years both companies continued to operate under their original names. In 1892 they were incorporated as Wynn, Timmins & Co, and in 1897 the premises in Commercial St were renamed Century Works. The company survived until 1969, when they were taken over by Balfour Dawins Ltd of Sheffield, and the works in Birmingham closed*.

This double edged billhook has a tubular handle, possibly the socket for a wooden handle, but the absence of a hole for a fixing screw or rivet implies that it may have been intended to be the handle (as found on billhooks from, or exported to, some other countries). It is also marked with three circular stamps.

* Thanks to Jane Rees, and Grace's Guide for supplying information on the two companies.

J VINCER - Possibly VINGER. From the collection of Nick Litton. It came from the Winchelseas area in East Sussex.  Scotty Dodd has done some research on this maker, placing him in Peasmarsh, Sussex in 1857 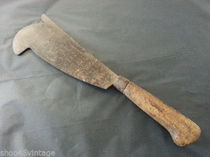 WARD & PAYNE (late David Ward & Co) were founded in Sheffield in 1803. An advertisement from 1851 shows them as manufacturers of files, steel, engravers & joiners tools etc. In 1926 they became a private company, and in 1961 are listed as having 200 employees. Billhooks bearing the W&P and anvil logo are not uncommon.

WILLIS - Alfred Willis was the blacksmith at Bramley in Hants and marked his tools as such. He specialised in making billhooks from old farriers' rasps - like the one marked AB above, the teeth marks of the rasp still show, and so demonstrate the level of skill required to thin the blade and bend it to shape without resorting to cropping and grinding... This one from MERL collection at Reading... I am still looking for one.... 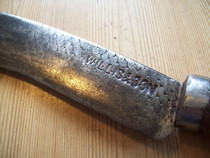 Stamped WILLIS & SON - my only thoughs are that this is the father of Alfred Willis - the shape of the blade and the fact that it is made from an old rasp are very indicative of his work (the other possibility is that Alfred had a son who pre-deceased him). 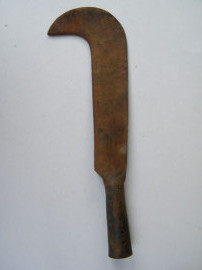 WILLS - A W Wills from Wolverhamton, later part of EVA Industries, the brush hook was found in Australia - a UK export. Certain makers such as Lidstone from Kingsbridge in Devon, or Martindale in Birmingham specialised in plantation tools and exported most of their output. 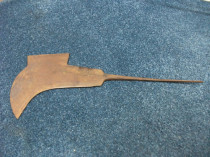 YATES - John Yates of the Edge Tool and Plantation Hoe Works Birmingham, also later part of EVA Industries - situated near Martindales' Works and now believed to be a tradename owned by them (see also the Chillington Hoe Company)