The West of England isolated from the rest of England before the arrival of the railways (the canals really reached no further than Bristol) has long had a tradition of edge tool making. Somerset in particular had a strong edge tool industry until the collapse of English agriculture in the 1870's.

The Mendip hills to the west of Frome have an underlying wealth of minerals, and even though coal mining ended in the 1970's, quarrying of limestsone for road building is still a major industry. The demand for edge tools for mining, quarrying and agriculture created a local response during the 18th and 19th centuries, with the fast flowing streams fed by the high rainfall from the Atlantic Ocean to the north supplying water power.

Most edge tool works were situated on the southern and eastern flanks of the Mendips, from Frome to Shepton Mallet. A few were located around Bristol, on the Somerset-Gloucestershire borders.

The coal seams ran roughly north-south, from Bath to Coleford, with the largest mines in the Radstock/Midsomer Norton/Paulton regions. Colliers had a requirement for picks and shovels, both of which wore rapidly and had to be replaced. Most pits had a blacksmith's shop where picks could be reforged, hardened and tempered to increase their life, but most tools would have been bought in from edge tool makers.

Obtaining information on the makers is difficult, with few records surviving. I would therefore recommend reading Robin Thornes' book 'Men of Iron' reviewed elswhere on the site. Studying trade directories such as Piggot's, Slater's or Kelly's coupled with systematic research in Parish Records and Census returns, together with the few surviving period tools bearing a maker's name, allows a picture to be built up of the extent of the industry.

The firm of Fussell of Mells is well known, but during the same period there were smaller forges in existence. 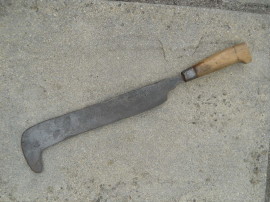 A billhook stamped A STEEDS belong to Tom Randall of Midsomer Norton. I recently bought a Bristol pattern reap hook with the same name stamp. Like some other makers e.g. Finch of Sticklepath), Steed stamped his tools 'upside down', i..e. read when looking at the tool from the top edge.

The tilt hammer at Gurney Slade shortly before demolition to make way for a Bristol Water Company works. Note at the left the large cam, operating the shears to cut the bar into working lengths. 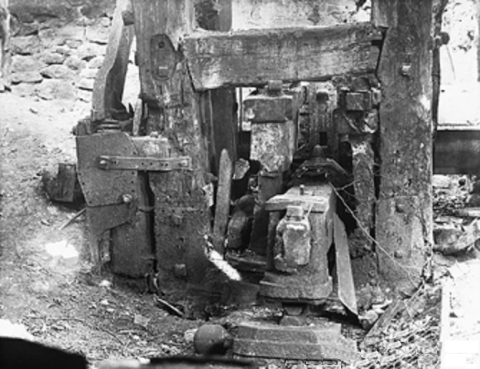 Another view of the Gurney Slade works, taken by a Dr Reid c 1930. The works employed 13 men.

Padfield - possibly a Steed employee who later started his own firm - a Jacob Padfield and his son Isaac were listed in the 1861 Census as edge tool makers living at Gurney Slade Bottom in Ashwick, presumably employed by Steed (see above) - two younger sons are listed as coal miners).

I have several billhooks stamped W C Padfield & Sons, the latest (September 2013) a gift from 92 year old John Harrison of Peasedown (near Bath), a retired miner and builder. Recent research finds a W Padfield listed as an edge tool maker in Chilcompton in 1902.

The blade of a 'thatcher's billhook' made by W C Padfield & Sons. Note the similarity in shape with the Steeds billhook above. This pattern, often called a thatcher's hook, is common to the North Somerset/Bristol area.

In his conference paper on Edge Tool Makers, Change and Continuity in the Manufacture of Edge-Tools, Prof Ted Collins states: Between 1830 and 1850, two corn mills at Gurney Slade Bottom and Chilcompton, were converted to edge- tool making by the addition of hammers, the latter closing in 1920, the former in 1934, on the death of the third generation of the founding family. Other makers are recorded at Stoke Lane, an old industrial centre where in 1871 Fussell and Wise had an ironworks (disused in 1886), at Ashwick, where an iron works is noted in 1818, and Stratton-on-Fosse where several small forges are shown on an 1840 tithe map. Each of the two last–named had access to a water supply via conduits from nearby streams, but there is no archaeological or documentary evidence of water hammers.

My latest research shows that there was an edge tool and shovel works employing a number of men at Chew Magna during the period 1813 to 1838. Possibly started earlier, but the Parish baptism records before 1813 do not show the employment of the child's father. In the 1840's a number of edge tool makers moved from Chew Magna to work at the edge tool works at Coaley in Gloucestershire, so one can assume the works at Chew closed at this time. At present. it is not known who owned the works, or if the tools were stamped.

From Stoke Lane to Gurney Slade is only about 5 miles, east to west (less as the crow flies), and from Chilcompton to Oakhill about 4 miles, north to south, with Ashwick and Stratton on the Fosse lying roughly in the centre. It is likely that the various makers, including James Fussell, all had close links either through marriage; or having served apprenticeships, or having worked, in each others forges. The Somerset coalfield lies beneath, with the Nettlebridge mine near Stratton, and Radstock and Coleford a few mile to the north east (Coleford probably gets its name from charcoal, rather than the underlying coal, and denotes the importance of the Mendip forests for charcoal making and a local demand for iron and steel making)

Robert Coombs had an edge tool works at Doulting, on the ridge above Shepton Mallet. There are the remains of two ponds built (according to the town council) by a relative of the Fussell family of Mells. I had been told that Steeds operated there (as that firm was run by James Fussell Steed, there may be an overlap of information). More research is needed... there are the remains of a launder supplying an overshot wheel. 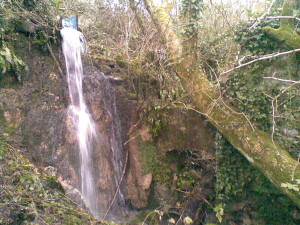 The remains of the feed to a water wheel on the site of the edge tool works at Doulting. Note the brick 'voussoir' arch in the centre of the picture.

Handlemaking for the edge tools was also a local trade - as well as William Fussell's works in Mells, there must have been other makers. A Handlemaker Road in nearby Frome is evidence, as well as family history (the family of an Eliza Cooper of Nunney who were carpenters by trade 'crafted' wooden handles for edge tools. A William Clarke is listed in the 1891 Census for Mells as a handle maker, presumably working for Fussell.