HALE BROS also stamped 1916, this is a thick nose military billhook made during WW1 for use by soldiers in Flanders and  to cut saplings to make fascines and hurdles for revetments to support trench walls. Hale Brothers were located at Moorfield Works in Sheffield, and made a wide range of carpenters'tools. Their corporate mark, a Horse's Head, was granted in 1842 - they were still making tools in the mid 1930's. In 1975, the firm (or their name) was part of the Kutritre Group. 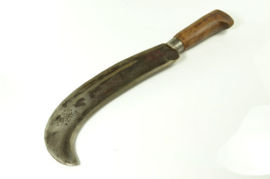 J HARRIS of Staplehurst Kent - stamped Victoria Works and with a Prince of Wales feathers logo, John Harris is believed to have worked from circa 1887 to 1915. 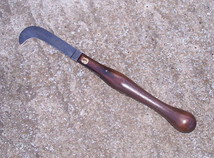 HARRISON BROTHERS & HOWSON - edge tool and silver plate makers, they succeeded Harrison Bros (1849 -1861) in 1862 and were adsorbed into Viners in about 1925. From 1950 the company name has been used by a silverware-gifts company based in London. 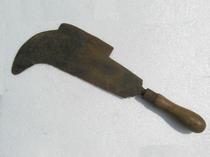 GEORGE HATCH Ltd - also stamped LONDON, nothing is known of this maker - it is most likely a dealer's (ironmonger's) stamp. 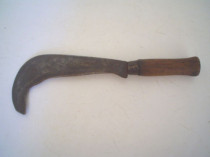 HELSON - Thomas Helson (Snr) was born in 1782 and worked at the Iron Mills in Dunsford Devon - he was retired in 1851 and his son Thomas (Jnr), born 1816 ran the business, employing at least four other edge tool makers.  In the 1851 Census he is shown as having a son, John, then six years old, who presumably suceeded him. Alec Morris's father moved from Gilpins to work there approx 1930 and took over the business a few years later. 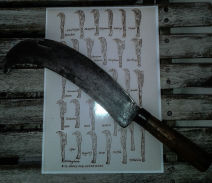 HEMS - Stamped J Hems, nothing is known of this maker. The pattern is typical of those from Kent & Sussex makers 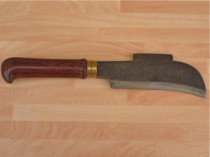 HOLTZAPFFEL - a London based comany who specialised in engineers' tools; notably their ornamental turning lathes. They also made high quality hand tools for gentlemen. This is a Milton Hatchet, with a single bevel to the straight blade on the back. 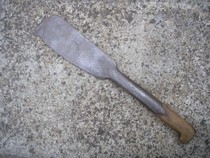 HOWARTH JAMES (later Howarth and Sons) - better known for axes and carpenters' tools, this billhook is unusual in its shape and its strapped handle. It is almost like a single bladed Yorkshire pattern, if such a thing was ever made.... Howarth was born in 1811 into a family of edge tool makers. He was in partnership with Henry Taylor from 1834 to 1842, but started on his own shortly thereafter. His sons ran the business after his death. The firm closed in 1913, and Robert Sorby & Sons later acquired the trademark in 1922.

This small Gentleman's billhook, with a brass ferrule and an ornate hardwood handle, by James Howarth appeared on ebay in 2014 (sadly it was too expensive for me). 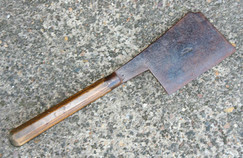 G HUNT of Caythorpe in Lincolnshire, I suspect this is an ironmonger's stamp on this butcher's cleaver. 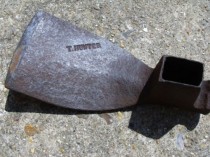 HUNTER T - no other details

IBBOTSON THOMAS - There was a Thomas Ibbotson & Co making edge tools at Whitechapel in Liverpool from about 1841 to 1900. This one is also stamped Sheffield: the company started in Charles Street in 1823, moved to Paternoster Row in 1825 and were taken over by William Marples in 1909. Marples continued to use the name well into the 20th century. I do not know if the Liverpool firm had any connection to the Sheffield one: possibly not as the 1859 London Gazette entry announcing the dissolving of the partnership of Thomas senior, and Thomas the younger and William only mentions Sheffield. This hook appear to be a Westmoreland pattern. 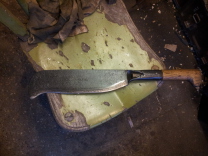 JACKSON - Cirencester was the centre of edge tool making in Gloucestershire, with several edge tool makers and cutlers operating there until the late 19th century. The last was J H Jackson, who also had an ironmongers shop at 22 Cricklade Street, with examples of his tools hanging from the wall above the windows. The image is of a socket handled Cheltenham pattern. Jackson is the only edge tool maker listed in the 1889 Kelly's Directory. There is a stream that runs through the town, but it is likely all the forges were hand forges, not using water power. The ironmonger's shop closed about 1970. 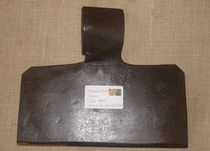 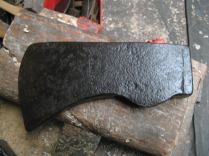 J JONES - This is a Welsh maker, probably best known for colliery or miners' axes 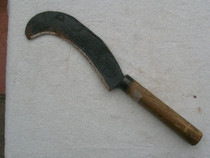 KILLICK - the Killick Family from Barnes Green, Itchingfield were blacksmiths and edge tool makers. Silas Killick (1852 - 1915) is best known for his billhooks. More information on Kent and Sussex makers can be found on the site of Ian Swain. This example was bought in March 2014. 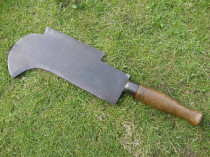 KITCHIN S&J  - this a a double edged Kent pattern stamped GPO. Kitchin specialised in supplying tools to government contracts. Their Snakebrand trademark is now owned by Martindale (see below).

LEPPINGTON - Cutlass Works, Sheffield. They were cutlers, it is not known if they also made billhooks, but many smaller pruning knives, with both fixed and folding blades, survive.

LIGHT (Stamped R LIGHT) - this West Country (possibly Hampshire or Dorset) billhook also from the collection of Rob Beard. There were several blacksmiths called Light in the Exeter area in the early 19th century. The full name stamp on this dates it to 1850 +/-, so possibly a descendant.

LODER - Frederick George Loder was working in 1923 and 1930 at the Holbeam Works situated on the river Lemon at West Ogwell in Devon. His father, John, ran the forge before him and is listed in the 1891 census. A John Loder (possible relative) was listed in 1851 as the head blacksmith in Dunsford, then the site of the Helson edge tool works (which later became Morris of Dunsford). The village had a hand forge making tools from the late 18th century until 1830, when the cornmill was converted into a hammer works with two trip hammers powered by the water wheel. When the works closed the hammers were removed to the Science Museum in London for preservation.

MARSDEN BROTHERS George and Robert Marsden are probably best known as suppliers of ice skates to Queen Victoria. Situated at Bridge Street Works, in Sheffield, they claimed to have  a history dating back to 1696, but I suspect this is through the acquistion of older firms, rather than actual fact. In 1839 Joseph Fenton and George Marsden joined together to form Fenton & Marsden, late W Stanley. Circa 1846 Silverwood formed a partnership with Fenton & Marsden, and between 1852 and 1856 the Marsdens bought out Silverwood, re-naming the firm Marsden Brothers (I suspect the earlier Marsden, in partnership with Fenton, and later Silverwood, was their father). In the early 20th century the firm was bought out by John Wilson. who soon after were adsorbed into Robert Sorby. This rather nice No1 gentleman's hook appeared on ebay in June 2014, sadly too expensive to add to my collection.

MARTINDALE - a military pattern dated 1915 with their Crocodile Works logo (see Yates, below). They specialise in export tools, notably machetes for plantation work. 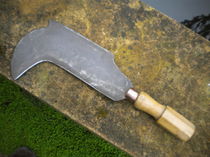 MATHEISON Alexander Matheison originally of Saracen Lane, Glasgow are better known for their carpenter's tools, especially their chisels and planes. The company was in business from 1822 to 1966, moving to new premises, the Saracen Works in East Campbell Street in 1854. They became a dormant subsidary of Record Ridgeway Tools Ltd (Sheffield) in 1957. This double edged billhook, possibly the Glasgow pattern, sold on eBay in May 2014 is fitted with an octagonal boxwood chisel handle. Possibly original, it is more likely to have been rehandled by someone who thought the chisel handle was more typical of Matheison's tools... 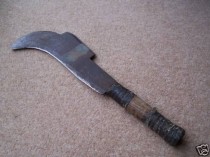 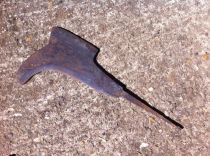 MELTON - This Midland's pattern is stamped Bryan Melton. This may be a dealer's mark rather than the maker as the No2 stamp is very typical of Sheffield makers such as John Harrison 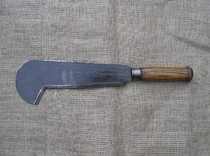 MOSERS just the stamp on this billhook indicates the maker, but nothing further is known. The billhook shape however is interesting, as identical models have been found by a number of other makers. It appears to be an (unknown) contract model, but no clue as to who ordered them...