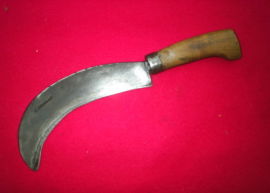 NEWNHAM - stamped G Newnham, I have no more details on this maker, but the blade shape indicates he may be one of the smaller makers from the Sussex or Kentish Weald. Update, he is on Ralph Griffin's list as being from West Hoathly in West Sussex c 1915 . 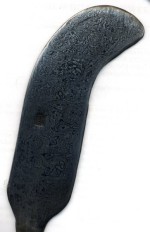 J NOWILL & SONS SHEFFIELD - a Sheffield cutler who also made edge tools. Their JN&S  cutlery mark was used from about 1901 to 1930 (prior to that they used JN), so this small billhook probably dates  from the beginning of the 20th century. The damasced appearance of the blade was accidentally exposed after cleaning by acid and is typical of forged crucible steel, rather than as a result of deliberate pattern welding. 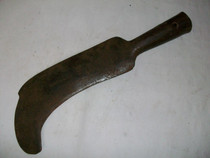 C NURSE & CO - Charles Nurse & Company were London based tool sellers, their address at one time was 182 & 184 Walworth Road, SE (now the home of the Walworth Society). It is unlikely they made their own billhooks, most probable they were made in Sheffield or Birmingham and stamped with the C. Nurse & Co stamp. This one appears to be a well uses socket 'Yorkshire' pattern, and is stamped with a number 2 (used to denote the size of the blade). 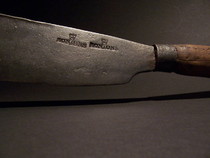 J ONIONS on the blade of a Newtown pattern billhook

PADFIELD - stamped W C Padfield & Son - a Somerset maker (a Jacob Padfield and his son Isaac were listed in the 1861 Census as edge tool makers in Ashwick, near Gurney Slade). The long blade is typical of those sold as thatchers' hooks, and the notch near the tang is found on those from Bristol. See the section on Somerset makers. 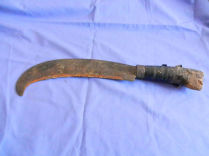 J S PAINE -  a Sussex style billhook, no details at this time..

G PILBEAM - a Sussex maker from the collection of Ralph Griffin.

J PILBEAM - Maker Ticehurst... Unusually stamped on the 'back' of the blade

J PIKE from Thatcham. There were several blacksmiths in Thatcham in the 19th century, none traced so far were called Pike. The style of lettering (sans serif) suggest this may well be a 20th century tool (c.f. Willis of Bramley).. 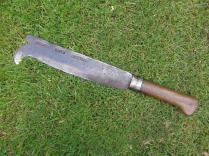 RICE - stamped G Rice this looks like a blacksmith made billhook. It was found in Norfolk, ansd is a variant on the Norfolk light pattern, with a round notch at the end of the blade rather than the more common vee.

A cold chisel stamped E&H ROBERTS from Deanshanger in Northants. As yet no sign of a billhook from them, but as there is a Deanshanger pattern, I suspect it originated in the village forge and that the Roberts family made them...

Update: A Solomon Roberts moved from Deanshanger to Seal in Kent sometime before 1881 and is believed to have taken over the works of William Swift who died in 1885. He was still listed  there as an edge tool maker in the 1911 Census.

RODGERS - probably the cutler, William Rodgers, Sheffield - no more details, but this is a tea pruning hook of a type produced in Sheffield and exported to India. Also sold in the UK as a garden prunuing knife. 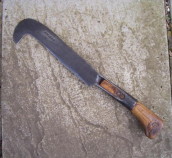 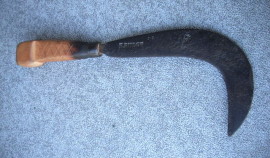 E RUDGE - this appears to be an English billhook (it was found in Canada) - the handle is not original - nothing else known of the maker. 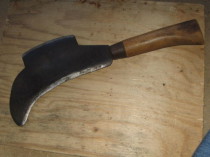 J SMITH of Charing, near Asford in Kent. 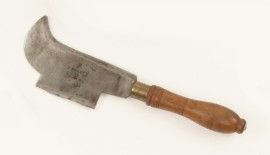 I SORBY  and Mr Punch logo - John Sorby was appointed Master Cutler of Sheffield in 1806. Later the company became John Sorby & Sons. After his retirement his sons John and Henry took over and the name changed to I & H Sorby. The mark was acquired by Lockwood Brothers in 1847. To confuse the issue I Sorby was a trademark used by C & J Turner, latterly Joseph Turner and Company, who succeeded the earlier Sorby and Turner, in about 1801 or shortly thereafter. It is not certain if it was the same John Sorby, or his nephew, John, that went into the shortlived partnership with Turner. Whatever, the I Sorby (and Mr Punch) trademark survived well into the 20th century as in 1909 William Marples & Sons purchased the remaining interest in Turner Naylor and Company, and thus acquired the stock and goodwill of I Sorby. In 1932 they also acquired through Turner, Naylor and Co the stock and goodwill of John Sorby and Co, and the tradename, I & H Sorby, and their Sheep trademark. 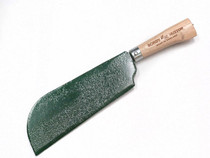 Marked SORBY HUTTON on the handle, this nasty billhook with its cross-rivetted tang, similar to those sold by Caldwells (formerly Stockton Heath Forge) in Warrington, reminds me of earlier imported tools that were made in India and sold under the Griffin tradename. The idea of rivetting is not new, it is done with great success on Japanese and Sardinian billhooks, but they use at least two rivets that pass nearer the centre of the handle, not one that passes through the ferrule as shown here.  Joseph and Ezra Hutton, later Thomas Hutton, were a well established sickle and scythe makers from 1791 until 1988 when the Pheonix Works in Ridgeway (Derbyshire), near Sheffield, closed and the name was acquired by Hand Tools of Dronfield. The Hutton trademark was BY and the sickles stamped Hutton & Co. The Sorby Hutton company was formed in 2006. It is uncertain at this time where the Sorby part of the name comes from... 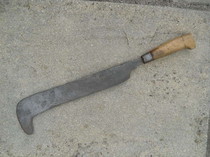 A STEEDS - The Steeds family of edge tool makers were well established in Somerset by the mid 19th century, George Steeds working at Gurney Slade, and Richard Steeds at Ashwick. The Steeds family, and also the Padfield family, are associated with Stoke St Michael, home of the Fussell family, who were also renowned edge tool makers. It is likely they either intermarried, or served apprenticehsips with each other. Arthur Steeds worked at Gurney Slade near Shepton Mallet, the works were demolished c1930 to make way for a Bristol Water Company treatment works. There was also an ancestor, John Fussell Steeds, who employed a number of men, and I have been informed that some tools are stamped Steeds Bros (tbc). 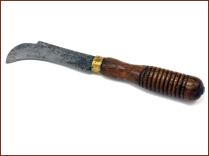 J W STUTTER - cutlers from Shoreditch in East London. They made a wide range of speciality knives for the various trades such as furriers and leather workers of London. 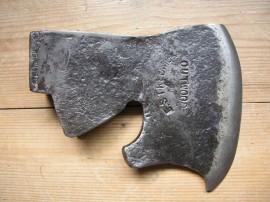 This rather ornate axe head is stamped E STREDWICK OUTWOOD. Belonging to Ian Swain, it is a recent addition to his collection - Outwood in Surrey being a small village near his home, and Stredwick a hitherto unknown maker. The blade is stamped with his name 5 times. Now to find a billhook by him...... 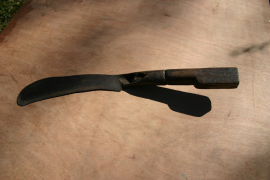 Stamped SWAFFER, from the collection of Ralph Griffin on the IOW, this cranked hook appears to be a Kentish hook similar to those made byWilliam Swift. (see GILBERT above).

SWIFT - William Swift was established at Seal in Kent. He succeeded Richard Shoebridge (Piggots of 1840 lists two edge too  makers in Seal, Shoebridge and a Robert Marchant). In 1858 there was a William Swift working as a blacksmith in Seal, possibly the father of the edge tool maker. It is not known if he worked for Shoebridge, or just bought the goodwill of his business. The business ran from mid 19th to early 20th century: later the business name was bought out, and manufacturing transferred to Staffordshire (probably to Cannock).  Early tools have three deeply incised stamps: WS a crown WS - later billhooks have the word 'genuine' added - much later the stamp hardly bears any resemblance to the original.

Willian Swift died aged 70 in 1885, and the business appears to have been run by Solomon Roberts who moved from Deanshanger (see above). He was first recorded in Seal in the 1881 census when he was lodging with William, and was still there in 1911.

William Swift - Edge Tool Maker
A brief history of the Swift business by David Williams, a Kentish local historian. Written for The Advertiser, a local free newspaper in July 2013. Published here with his permission, and my thanks
William Swift.pdf
Adobe Acrobat document [76.0 KB] 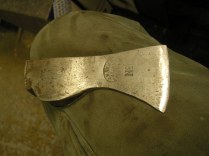