The peoples of Africa have long had a tradition of forging iron and steel blades. Most famous are the smiths of the Mangbetu tribes of Zaire, formerly part of the Belgian Congo. Many hundreds of their 'trombash' have found their way into private collections in Europe and the USA.  Although billhook shaped, they are not tools as such - they served more as money, weapons and badges of rank.

TFSR (Tools for Self Reliance), a British Charity that sends container loads of unwanted tools to poorer African countries no longer sends billhook - today it imports and sells billhooks made by local blacksmith in Tanzania in the UK.

In South Africa the Lasher tool company now makes and exports to the UK a wide range of edge tools (see below).

Many African countries have their own distinctive pattern of 'billhook' and 'sickle' types of tools; many used for cermony and well as having a practical purpose... With the changes to country names and borders in the 20th and 21st centuries, placing the origins of some of these tools can be difficult. 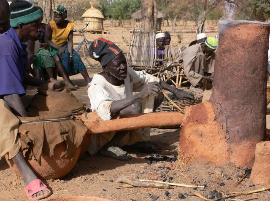 Converting iron-ore to iron in a bloomery. The starting point for making edge tools. Earthenware pots covered with animal skin form the bellows. 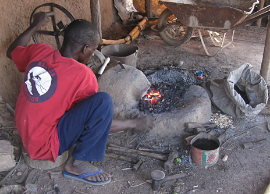 A local smith in Mali, making spear heads and edge tools.. The smith appears to have a fan to create the draught - similar to those used on turf (peat) fires in Irieland... 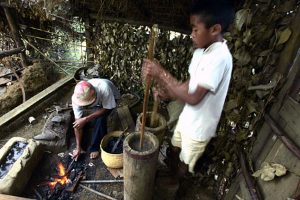 Another African forge, country unknown - a fusion of old and new... 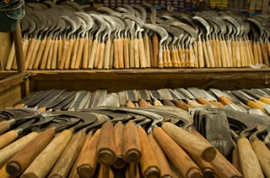 Locally made rice sickles on a street market in Nigeria... 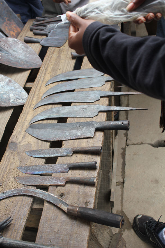 Tanged billhooks (without handles), and other blacksmith made tools, on a street market in Madegascar... 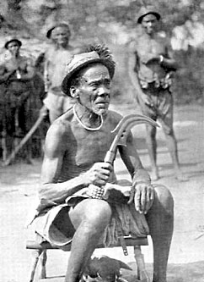 The variety of blade shape and decoration of the 'trombash' (above) seems only limited by the imagination and the skill of the smith. Handles may be in hardwood, often bound with woven wire, or ivory. The workmanship is extraordinary, the more given the primitive forges and tools used (see below).. 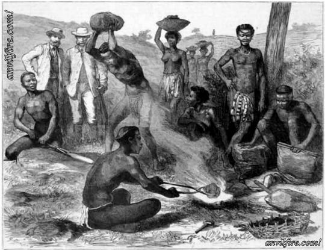 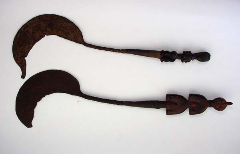 Ashanti, Ghana - a thin blade, often made of copper, with the handle in the form of bell, these most likely only had ceremonial use.. 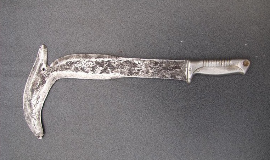 Bembe people, Angola - this wooden 'billhook' is used for ceremony and dancing.. 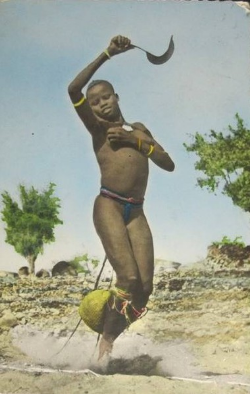 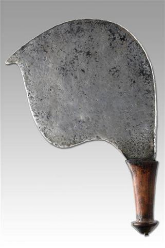 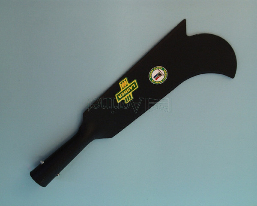 A modern double edge billhook or slasher head by Lasher... 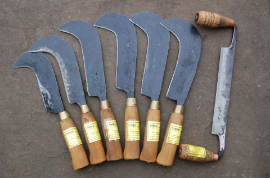 Tanzanian billhooks, as imported by TFSR (see above)..