The billhook, handbill or bill, has been in use in most of England, Wales, Ireland and Scotland - anywhere that green wood needed to be cut or split - in coppice and hedgerow, woodland and garden, farmland and city..... Most counties had a regional pattern, some had several. As yet I have not found a pattern for Cornwall, but the Devon half turn hook is often found there.

My own region, Wiltshire, does not have a county hook, but several versions for local towns: Salisbury, Downton, Chippenham, Warminster and even one for the small village of Imber on Salisbury Plain (population before closure in 1939 approx 152) - and those from neighbouring counties were often used, e.g. Berkshire, Hampshire, Dorset, Somerset, Gloucestershire, as well as the Bristol pattern..

Local makers included Down of Mere, Buckland of Netheravon and Somerset makers such as Fussells, Coombs and Steed, but by the first half of the 20th century most were being made in the Midlands towns of Cannock, Birmingham and Sheffield... despite some token resistance from the Devon maker, Knapman, into the 1940's.. 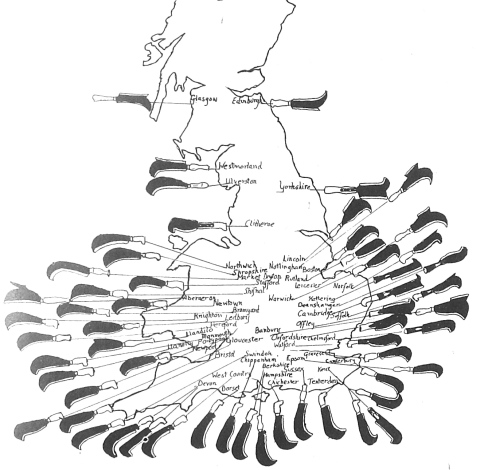 The range of English billhooks, or at least some of them, from the pages of the 1982 Countryman article by Jack Wilson (so far I have been unable to track him down for permission to use the image).