Since Roman times wattle hurdles, fascines and gabions have been used to make both shelters and defensive fortifications. A fascine is a bundle of saplings, and a gabion is a woven wattle basket that can be filled with stones or earth. A billhook is the most common tool used to cut and split the saplings used to make these, and it can also be used to cut firewood, gather bracken for bedding and cut grass for fodder for horses. The billhook thus has a history of military usage equally long as it has for agricultural or viniculture uses. Even today the term 'fascine knife' is used for a billhook, especially in the USA. 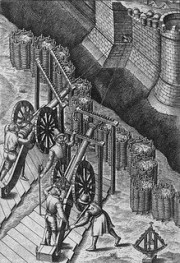 A link to the 151st Line Infantry Regiment - showing trench reinforcements from the WW1 (1914-1918) French trenches. The illustrations show how a combination of wattle hurdles ('claies'), gabions and fascines were used to create revetments, shelters etc: http://www.151ril.com/content/history/french-army/14

It is difficult to positively any early billhook as a military one, but some have been dug up on  battle sites in the USA (War of Independence -18th century, Civil War - 19th century), and thus can be associated with military use. In Europe many armies issued a small short sword called a fascine knife to soldiers, which in time were replaced by a billhook shaped tool. In the UK a billhook was first issued to platoons as a encampment tool, and later to machine gunners and artillery units.

A socketed or iron handled billhook from Fort Stanwix at Rome, New York a site of a battle between US and British Forces in 1777. This one was found with other artefacts that date it this period.

A squad of eight riflemen of the Napoleonic Wars, c1809, had 4 billhooks to carry between them - each man carrying one every other day (in addition to the 80lbs of kit he already had to carry). The colonel of a locally raised militia or a regular regiment had to supply his Pioneer section with 11 billhooks with leather cases and girdles (slung at the hip) as well as a variety of other tools*.

* Regulations regarding the Pioneers of Infantry (Line) Regiments Being Furnished with Proper Tools and Appointments. General Regulations and Orders for the Army. Adjutant's Office. Horse Guards, 12th August, 1811, Pages 65, 66, 67
Located in the Library at Historical Fort York. Toronto Ont. 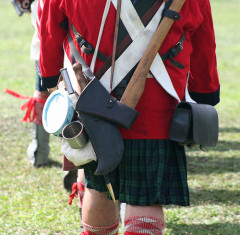 A typical Pioneer's kit included a billhook, and an axe. Other members of the sevtion carried a pick or a shovel, an auger or a saw - but all carried a billhook.

By the late 19th century, most governments issued troops with standardised tools, and in many countries a military billhook was issued. In the UK the heavy nosed Pontypool model became the issued 'sealed pattern' billhook of the British Forces, and was also adopted by Commonwealth Forces, e.g Australia and Canada. (British 'Sealed Patterns' date from the beginning of the 19th century, i.e.the Napoleonic Wars, when certain items of military clothing and equipment were first standardised. The date of the sealed pattern billhook is uncertain, but I guess mid 19th century, as a pattern dated 1865 survives for a billhook sheath - the earliest date stamp I have seen is for 1903.) 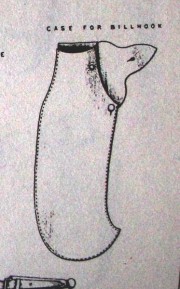 From 'Equipment for Infantry' HMSO 1865.

Many were made during the two World Wars. I have not seen any from the inter-war period, but they were also made after WW2, but by the 1960's they had been largely replaced by the Machete and the Golok pattern jungle knives.

British Army billhooks often turn up on foreign auction sites, e.g. Germany, Italy and Greece, where they were no doubt left behind after battles of WW1 and WW2. French billhooks from WW1 regularly turn up as well, being unearthed during ploughing on the battlefields of Northern France (e.g. The Somme) - they form part of the annual 'Iron Harvest', the greater part of which often exceeds 900 tonnes of UXO.

A French model stamped Bret 1906. The blade is heavier than a normal billhook, and the tang much thicker.

French 'fouille de détection' (metal detector find) from a WW1 battlefield. Even after nearly 100 years on the ground, it could still be restored to a working tool.

Stamped Martindale 1915, this one has the Martindale Crocodile stamp, but not the government's broad arrow.

Stamped 1941, Pioneer Calcutta - this one dates from WW2, and was probably made for the Indian Army.

Dated 1942, this one was found in Canada. The makers stamp CF&F has not yet been identified. Similar models have also been found in Australia, so its origins remain uncertain.

This one from Canada, stamped Smart Brockville Canada. Brockville is in Ontario. Not dated, it is probably also a post-WW2 issue: its shape varies a little from the UK model.

The sheath is stamped J E Lortie, Montréal, 1942. The billhook has a small lozenge with a G in it (the same stamp is also found on the Canadian CF&F billhooks, above). 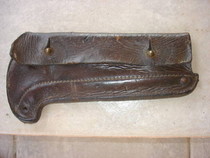 A French leather  'étui' (sheath), stamped Fourreau 1916. Canvas replaced leather during WW2. Despite the sheath being listed in the 19th century, no examples from the 20th century have been found for British billhooks. The use of a sheath came back into service during the 1970's for the British Army 'golok' or jungle knife. 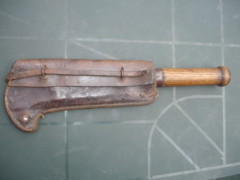 The billhook is stamped Saut du Tarn 1915 - the sheath on this model is held closed by a leather strip that passes through brass eyelets, not buttons as on the example above. The later canvas sheaths has metal push-button stud fasteners.