As with most tools modern makers seek to improve upon the design and function of billhooks. Often this is led by the accountants who want to reduce the manufacturing costs, reduce the life expectancy and improve proftitablity. A tool that wears out in a year or two has to be replaced - hard point saws are an example, they cannot be resharpened by the user, and cost less than the price of resharpening a traditional saw. However, most modern billhooks seem to be fairly well made, even if stamped from sheet steel, rather than being forged from solid bar.

The ubiquitous Fiskars brush hook from Finland, sold in the UK as a Wilkinson Sword tool, and in the USA as a Gerber (mentioned elsewhere on the site), is a good example of a reworking of a traditional tool to 'improve it'.... India, Pakistan and China are producing copies of European billhooks, but there are other makers producing acceptable tools, and in England and the USA a rebirth of traditional hand made billhooks.

The Condor CTK3008B brush hook is made by Imacasa in El Salvador. The original blue plastic handle is now replaced by a grey/black one, and the blade appears to be DLC (diamond like carbon) coated. Dating from 1963, the factory was purpose built in Santa Ana by the Solingen (Germany) Weyersberg company. The Condor name is used for tools sold in North America. 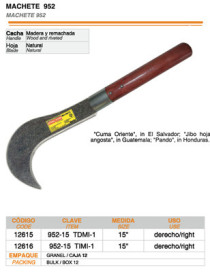 For use in South America and Mexico, Imacasa make a range of traditional machetes in a range of local shapes. This one is found in El Salavdor, Guatemala and Honduras.

The Siket 'Multipurpose Cutting Tool' is a billhook in all but name - made in China, it is available in the USA, but not yet seen in the UK.

Not a billhook, but a MR5215 fireman's axe or hatchet, made by the Marbles (Safety Axe Company) of Gladstone, Michigan in the USA. The cutout in the blade is a hydrant key. 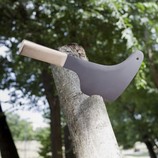 This prototype 'roncola-pennato' was seen on an Italian website in 2010.

Sold as the Woodsman Bill Hook by 'In Excess', based in Salisbury in Wiltshire(UK) the origin of this plastic handled tool is not known. They also sell a longer two handed version, with a back blade, very similar to the German 'zweihandsichel', see below... 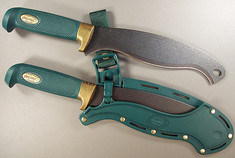 The Condor Martef model with a coated blade and a rubber handgrip. Sold by Kellam Knives in the USA, this appears to be the Finnish 'vesuri' made by Marttiini Oy, although labelled as a Condor knife, this is the model and not the maker... Although not currently listed on Marttiini's website, it still appears to be in production. Martef is the name of the coating (I guess a special MARttini TEFlon). 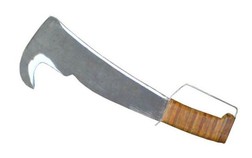 The SSG04 billhook-axe, a copy of the Woodsman's Pal made by Satyam Tools in the Punjab India. They also make a wooden handled version, as well as several styles of traditional (European) billhooks. 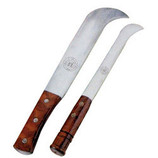 Typical Indian made billhooks, often imported into the UK. Offered by many makers, this image is from the India Mart website, where links to many manufacturers can be found. Stamped from sheet steel, with rivetted hardwood handles, the quality is variable, ranging from excellent to poor...

A modern interpretation of the Llandillo pattern made by John Beavis of Olivemead Forge in Wiltshire. John is one of the new generation of blacksmiths who also make excellent hand forged edge tools.

A rare find - hand-forged billhooks from the USA. Forged by Elmer Roush of Brasstown in North Carolina, these distinctive shaped tools appear to be well made.