Most armies of WW1 and WW2 had a billhook issued to their army Pioneer Corps and also to most Infantry and Artillery Units. For example, they were carried on the gun limbers of the WW1 18 pounder army field gun of the British Army, and were an invaluable tool to cut bushes to camouflage the gun position etc. In Europe it had its origins as the miltary fascine knife, a short sturdy sword, often with a saw tooth back, but by the end of the 19th century most armies had adopted a more conventional billhook, a tool that was more practical and considerably cheaper to make. 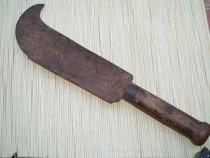 Spanish 'tajamata de zapadores' - date unknown. Overall similar in shape to that from France, but unusually it has a double edged blade.

Japanese army issue from the Mejii period (1868 to 1912). Unlike any Japanese 'nata', this appears to be based on an Italian 'roncola'. The sheath is similar to those used by the Finnish army (see below). During this period Japan was opening its borders and looking to the west as it moved from an isolated feudalism to its modern form, its army thus adopting western weaponry and tactics (and billhooks??).

Finnish army billhook sheaths from the post WW2 period. As yet I have been unable to find an issue billhook to place in one of them.