There are many regional forms of billhook in India, and as many different names are there are dialects and tribes. Again a problem obtaining information due to the language, but often as English is spoken universally, so not as difficult as, say, for Chinese or Japanese tools.

Up to the end of British rule and the Partition, India was a market for UK made tools, but locally made tools had also been made for centuries. Since WW2 India has developed its own manufacturing industry, and new billhooks are being made for the European export market - some UK 'makers' import tools now - I have even seen some Indian and Pakistani makers offering a full range of Italian leather handled billhooks.

A tea pruning hook, marked T E Thomson, Calcutta - Thomson, established in 1834, were factors, sourcing and importing  British goods for the Indian market - this tool is probably Sheffield made.

This tea pruner, marked Vaindhhayi Ketauellay, has an ivory handle and is probably of local manufacture. 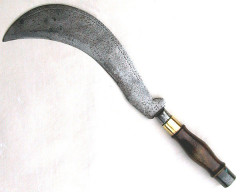 A Moplah chopper with a decorated blade from the Malabar coast (a predominently Muslim region of Kerala) in SW India. 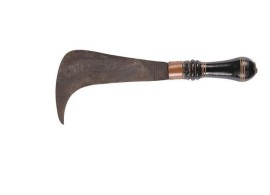 An 'akkuruval' for harvesting betel from Madurai, Tamil Nadu, a state in southern India.

A 'katte' or 'catte' from Sri Lanka (formerly Ceylon). 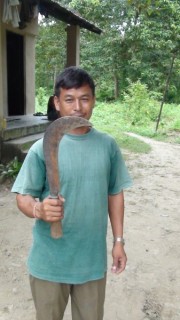 An 'aansi' from Nepal. The term is used for any sickle shaped tool, small ones are used for harvesting rice, larger ones like this are used for cutting firewood, clearing paths etc.